Wherein We Take To The Trails

Wednesday I took both my kids out on the trails for the first time this year, and it was also the first time ever for Chamie since we have been reunited, although we used to trail ride all the time back in the day.  I rode Miles, and my friend and fellow boarder Amanda rode Chamie.

It was a spectacular first outing.  I hadn't ridden Miles in a week, and Chamie hadn't been ridden in over a month.  The weather was perfect, and the horses were both lovely, with only a few shenanigans (all Miles, and tiny at that-a kick at a bug here, a throw of the head and a dance there).  We trekked along for about a half hour.  Longer would have been nice, but Chamie got sore at the end:(  She was an eager beaver the whole ride, keeping up with Miles and stepping out just fine, with no prodding from Amanda.  By the end of the ride, though, she was gimpy on her left front, with some minor swelling.  We both felt really awful, but after buting that night she has been ok.  The swelling is still there, and though it is minor, I no like.  Boo.

I'm going to get the vet on the horn soon and ask about his recommendations for her.  I don't expect her to be a regular riding horse, but I would love her to be able to do a trail ride every week or two (especially now that we know how great she is).  Will injections help?  Another supplement (doubtful, but you never know)?  A bute regiment?  Maybe nothing will make her trail sound.  That would suck, but it would be ok.  She is loving her life at pasture with Miles and Bliss, which is what is most important.  Today she asserted her boss mare self with Bliss while I was scratching her ears in the pasture, keeping Bliss at a distance with her evil mare face.  Not going to lie, it was cute, even if a wee inappropriate.  Her personality has really started to shine since she's been out in a big field with her little herd-I think her defenses have finally come down and she has relaxed into her new life.

I know my old girl is happy.  Now I want her to be as comfortable as possible as well, being able to walk as much of the 100 plus acres we have access to as she can.  It was obvious to me she loved it-no balking, no jigging when turning home, just walking next to Miles, turning her head this way and that, with a soft expression of interest and confidence.  It sucks when they get old:(

Chamie says to take your "old" label and shove it.

After the trail ride, Amanda took a couple of pictures of Miles and me-he was a wee put out that I actually made him work-I told him a jump of this size is hardly work. 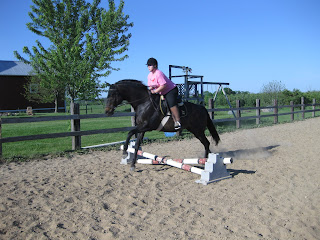 Why yes, that would be an OTTB shirt from Laz's mom, why do you ask?

All in all, more of the same-can't complain. 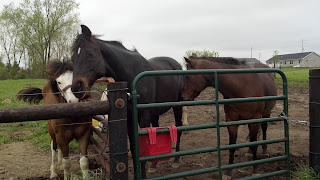 Miles loves the fellas too-here he is with Blue, our resident yearling Paint.  Those two would be
T R O U B L E if they ever took on the town together.
Posted by Sarah at 10:30 AM