The Good, The Bad, The Itchy

First, the good...I got in 3 rides since Tuesday! I know, nothing earth shattering for most people, but with everything going on (and yes, the mosquitoes are still trying to eat my horse alive-that's The Itchy) it's kind of a big deal. We also are fortunate enough to be able to stall-board Miles through the end of August, and I may continue through September just to make sure he's able to bulk up before the cold weather. I swear, Miles loses weight the way gas prices go up. He must have lost 50 pounds in just over a week, but he'll never put it back on that fast. Ah, well. He's still outside and able to graze and hang out with his buds for 12 hours a day, and he's never been the type of horse to mind going in a stall at night-especially right now, he down right welcomes it. I'll totally admit that I love "tucking" him in at night too, leaving him in a clean, bedded stall with a heap of hay in front of him. The other day I put him in his stall and loved on his big ol' thoroughbred head before I left, and I swear his eyes said "thank you".

As a result, he's soooo much more alert when I'm working with him. He really wasn't resting at all at night when he was outside, that's for sure. Our ride was super short this morning because I had to be somewhere, not to mention the mosquitoes were feasting on both of us, but I didn't care about any of that. Why? Because, he was finally FORWARD, and never took a wrong step despite horrid arena conditions, and I rode him without his hoof boots for the first time in a couple of weeks. I would like to thank our new BFF Durasole.

Hell yes it does!

I've only treated Miles' hooves 3 times, but already he's walking over gravel like it ain't no thang. I trotted him all over the arena (water logged in some places, hard and rocky in others), and then trotted him outside on the grass today and he was totally comfortable. I'm sooooo happy-rarely does a product actually live up to its promise, especially when it comes to sore pony hooves. If this hadn't worked (or, if this is some kind of fluke and he gets sore again), we were going to put shoes on his front feet. It's not what I want, but he was quite sore from our wildly inconsistent arena conditions, exacerbated because he was stomping so much due to the bugs, it wouldn't be fair to keep him barefoot just because I want him to be barefoot. So, fingers crossed the good times and free movement continue! At 12 bucks a bottle (where a little goes a loooong way) it's kind of a no-brainer. Two thumbs and four hooves way up!

Now, the bad. We didn't show on Thursday. I admit, I wasn't super excited to parade my ribby OTTB around in front of everyone (cute as he still is), and again, do I have to mention the bugs? The other major reason we didn't show-My grandma has had a stroke. It's...bad.

She is currently in hospice (my god, this is all happening so fast) and seems comfortable. The doctor has said she has days left. She is very tired and has trouble talking, but she knows what's happening-thankfully, she is not scared, upset or confused. Still, of course it's a very sad, strange time for my family.

She's such a wonderful woman, and I have so many lovely memories of her when I was a kid. This was a woman who, in her 70's, flew her 11 year old granddaughter out to a dude-ranch in Pueblo, Colorado, and we rode horses together in the mountains. At my wedding 7 years ago, she got on the dance floor and got down with the best of them. She's a grand dame. I wish her a peaceful passage and transition into whatever lies ahead. Love you, grandma. 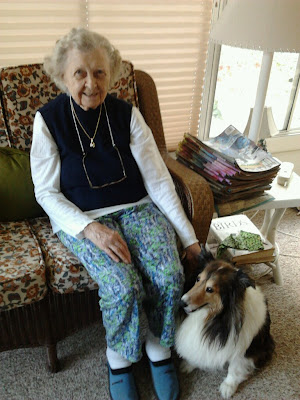 Taken the last day I saw her before her stroke, on her 91st birthday in June. We had a great day. She's a beautiful woman, and always has been.
Posted by Sarah at 5:26 PM