Chamie's Feets, and Riding in the Wind

It turns out, the pictures I tried to get of Chamie's feet don't really capture how bad they are, which is good news for all of you. I took these on Saturday, after 2 days of treating them with Thrush Buster. I also soaked all 4 feet in a Lysol/hot water/epsom salt mixture yesterday. I'll tell you, just the Thrush Buster alone has made a huge difference (that's the purple you see). A lot of that black shit I was able to just pick/scrape off after a treatment or two, which is great, and her frogs became much more prominent. Guess they didn't disappear after all! I didn't go out to see her today (wahhhh) to see how her feet look after the soaking, but I will be out tomorrow when she gets trimmed, HOORAY! So, without further ado: 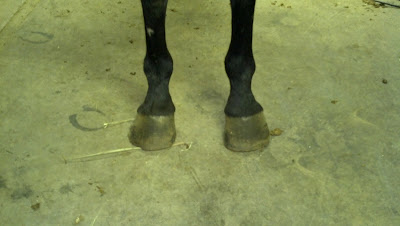 Front feet. Not terribly overgrown, but they still look like they haven't been done in 3 months or so. Angles are awful, and she's obviously wearing the inside edges more and the outside edges are flaring. Also, it's hard to tell here, but her hoof wall doesn't come close to coming in contact with the ground. She's sort of teetering on this hardened "crud" that I tried to work on, but it's going to take more than a hoof pick. 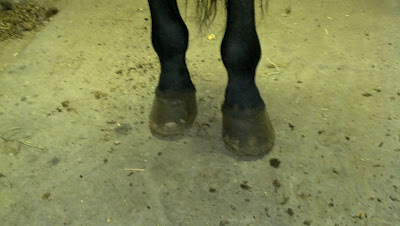 Back feet. Here you can really see how the hoof wall is about a half inch off the ground. Just...bizarre. Keep in mind there is no crud in her feet-they were picked as clean as I could get them. 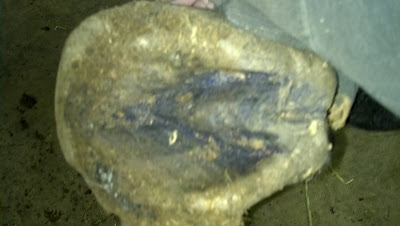 Right front. More frog is visible here than the first day I saw her, which was Thursday. Still, ew, right? I apologize for the quality of these pictures. She's still getting used to having her feet handled, and doing this by myself was a major challenge. You can see I couldn't even capture all the flare/overgrowth on the outside of this foot. 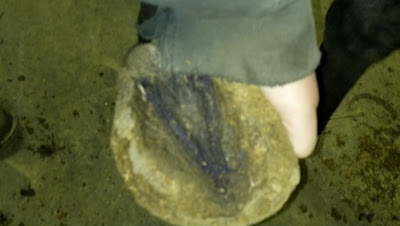 Left front, with my sleeve obscuring half her heel. Nice shot, Sarah. Still, you can kind of see more of the same. I still can't believe this is a CLEAN HOOF. Well, as clean as I could get it with a hoof pick and brush.

That's all I could get. My back is officially going to totally give out on me if I now have to handle and treat 8 frigging hooves almost everyday. Time for a pain management program for moi.

Now for Miles News!! It's been windy city here lately, but I so needed a good ride on my boy today I said the hell with it. It was beautiful and sunny-and the wind gusts were insane. I lunged him briefly (he was only a nut in the "scary end" of the outdoor arena, where there was farm equipment working in the field that was in ear and eye-shot). It's ok, because he needs to get used to that stuff, but combining that with the wind was too much, so I chickened out and rode him only on the "safe" side. Still, we had some very nice, very forward (ha ha!) work at all three gaits and we finished the ride by popping over our crossrail.

He's been great lately. We jumped a vertical last week. We've gone on trail rides with new friends. His coat is blooming and his weight is picture perfect. It's not great writing material, but it's great for me right now. I keep telling him he's going to be meeting his predecessor any day now, and how she's a super sexy older lady that he had better respect:) It would be great to pony her off Miles to get her into shape (assuming her feet get under control) before riding her. This from a girl who has never ponied a horse in my life (Hi Amanda! Want to teach me?;) My ultimate goal would be to have her available to go for trail rides when my parents or friends want to come out and ride. Either way, those two will be spending a whole lot of time together, so I hope my boy will be the gentleman I know he is almost all the time.

Happy Autumn everyone! Talk about change-it's everywhere I look these days.
Posted by Sarah at 9:30 PM