Back To Regularly Scheduled Programming....

Thanks for everyone's comments in the last week or so. Still don't know the outcome of my job, and won't for a month (VERY optimistic) to several months, which is frustrating as well. Nevertheless, onward and upward and all that! I don't want to talk about our depressing financial realities right now.

Let us talk about my sweet pony boy. I've been able to ride only once a week for the last month, which is so not good. Sickness (my own), weather (Snow is now a 4 letter word..I'm just done), and a general lack of giving-a-shit are to blame. With March knocking at the door, however, and the clinic at the end of the month-which I'm doing despite economic anxieties-that all has to change.

So, goals! I hear people sometimes set them, and even achieve them occasionally! Here are mine for the next month:

1) Ride at least 2 times a week, preferably of course 3 or even 4 (crazy talk!)...Miles should work (lunge or ride) 3, preferably 4 days a week. If I have a light riding week I need to do something more physically demanding than walking the dogs, although in ALL THIS FRIGGING SNOW some days that's definitely an aerobic workout. I've got the balance ball (with an exercise booklet...turns out it's good for more than just sitting!), I've got this workout for equestrians DVD I've never used, I've got a pilates DVD...I have the means, is what I'm saying. Time to use them.

2) When I DO ride, I need to have a goal for us, based on our previous ride. For instance, this weekend, Miles continued to be obsessed with the damn door leading in and out of the indoor arena. I know this is fairly common, but I need to address it, rather than just riding in 3/4ths of the arena like I did on Sunday. He's funny-he's not trying to be bad, he's just so INTERESTED in what's out there (there's a big expanse of field you can see, which is a view he never gets otherwise). Of course, he also wants to see if anyone is coming in to join us:) The giraffe neck, along with a total break in concentration, not to mention the tense body and potential for spooking thing is getting old, though. I'm going to lunge him in that corner (I lunge him for a few minutes before every ride anyway), and once I'm on him do lots of leg-yielding in that area to get his attention on something else and get him supple and bending. I can't worry about every little frigging spook, either. If he does, so what? I can handle it.
I know I should just shut the damn door already, but that feels like cheating.

3) During each ride, I need to build up my strength as well. I've already told Miles that I would really appreciate it if he could pack me around and be the Prettiest Lesson Pony Ever for 10 to 15 minutes each ride at the trot, so I can focus on my position and experiment with sitting trot and trot without stirrups. During this time I'm not going to worry about Miles at all, so long as he's going where I ask him to. So far he's been really great at being my Thoroughbred Packer. Who knew?

4) I need to work more on picking up our right lead. I've been riding so inconsistently that I've just been avoiding it altogether. I still lunge him on that lead, but I haven't had the will to work on it under saddle. To the left, he's been great, though, again, because we're just not working much at all, I'm not doing a ton of canter work, period.
Miles is a fantastic horse. There's no reason not to work more on this, particularly as we both get stronger. So what if we pick up the wrong lead sometimes initially? I need to get back to at least trying. Also, that' s partly what the clinic is for, to help us with that issue.
It also may not even BE much of an issue. He's looked amazing on the lunge, and has no problems at all picking up both leads correctly then. Considering how little I've been working him, that's pretty rad. He's also felt pretty amazing under saddle, somehow.

5) Finally, after a week or two of consistent work, try the Myler bit. I finally ordered a super cheap bridle from Valley Vet for the hackamore, so I can put the bit on my nicer padded bridle. Now, we may very well switch back if Miles still decides he hates hates hates it, but I have to try. Our initial ride with the bit is also going to be very easy-peasy, with little contact or demands from either of us. It's been so very long since he's had any metal in his mouth, I'm interested to see what his reaction will be. Bonus goal-if we have time to try the bitless Dr. Cook bridle that a fellow boarder has offered to loan us for a ride or two. I'd like to use something besides a hackamore for the clinic, if at all possible. Miles has always been great about letting me know how comfortable and happy he is (or is not) in his work, so I hope it will be easy to read him when using new equipment as well.

So that's my list for March. Not there? Work over cross rails. I'd love to pop over a couple, maybe, perhaps, but we'll have all spring and summer for such fun. I'd also like to get some rides in outside in the snow, which we STILL haven't done much of-though I'm not going to feel bad about that as the footing has been horrible.

We need to go back to basics right now, and getting ready for this clinic at the end of March is the perfect reason. It's not exciting work, (not to mention a snooze-fest of a read, my apologies) but I'm still looking forward to it:)

Here, have a gratuitous photo of Miles walking in the snow on a beautiful day. The only thing that's missing is me on his back. 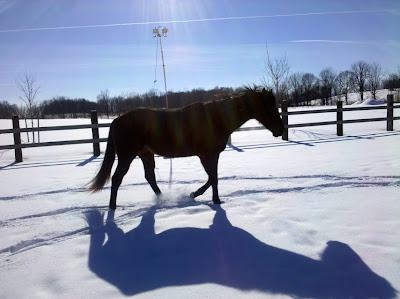 If you've read this far, thanks for indulging me. What about you? What are your goals for the coming month?
Posted by Sarah at 5:42 PM