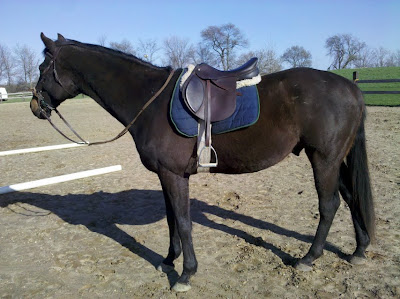 Yesterday, I'll be damned if I could get him to look at me for our pre-ride picture. However, aside from the few play-nicks on his coat, and a general layer of dust that is permanent until he gets a bath, look how good he looks you guys! My 'lil beefcake! 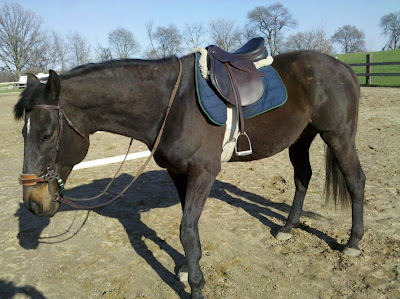 Siiiiiiigh....If you're just going to stand there cooing at me and holding that little black box that makes boop bee boop bop noises, I'm outie. 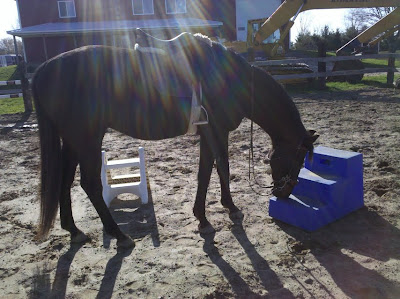 HERE, genius. Get on this thing, then get on ME so we can get to work and I can get back to my dinner already. Oy, it's like pulling teeth. 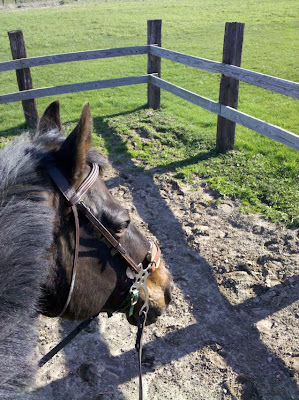 Miles was a bit looky-loo yesterday, but it had been awhile since our last ride, and over a week since I actually made either of us do any kind of work whatsoever. Also, no lunging, again-apparently he lets me get away with it every once in awhile; he was so great. We did more right lead canter work and it's getting more and more consistent. He's teaching me so much. Far more than I'm teaching him. 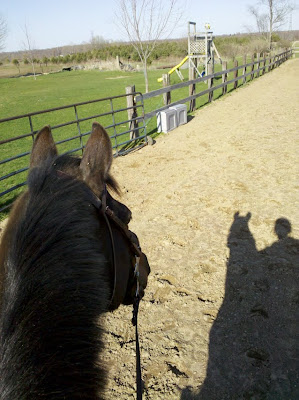 Wait, we DO look good together. I forgetz what I was looking at and feel like strutting my stuff suddenly! 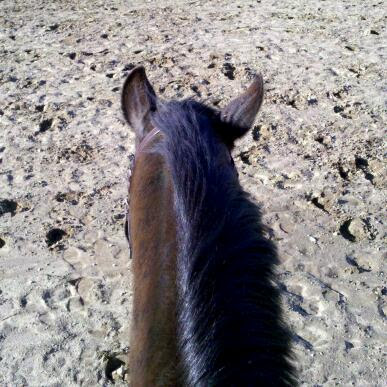 Two right leads in a row and she won't shut up about it. Something about being the cutest and smartest pony ever. I dunno, sounds about right to me.
Today I rode AGAIN. Two days in a row! That hasn't happened in a ridiculously, embarrassingly long time. I decided to switch it up and do some ground pole work and jump a small cross rail. It was WINDY, and it didn't help that I decided to lunge him (due to the weather) and dropped the frigging lunge line like a moron while he was cantering. Poor boy did a couple of panicked laps as the evil line pursued him, until I got wise and stepped over to the rail where he then halted. Still, between that and the wind he was UP. I lunged him again over ground poles and the small cross rail and his brain came back when he realized the line wasn't going to start chasing him again. I rode him for only about 20 minutes since he worked so hard on the lunge, and took him over the cross rail twice. The 2nd time he cantered away! I love how this horse tries, and forgives my own mistakes. It's a pretty nice partnership we've got going. 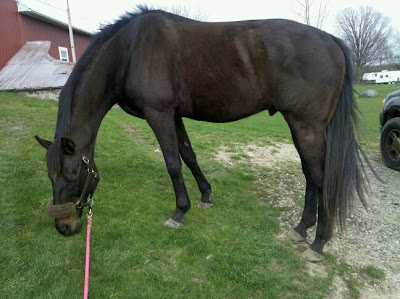 Milez favorite-green spring grass nom nom nom. Is Milez crack cocaine-it ain't medicine but it'll eaze mah pain..(ps- one sloppy wet Milez' kiss if you can ID the song and artist I lifted this from:)

So, they weren't the most ground-breaking of rides, but pretty great considering our inconsistent schedule of the last few weeks. The important things are that he is SO happy, and healthy (and BEEFY, hello!), and I am feeling a confidence when I ride him that I haven't felt since I was in my late teens and riding my sweet appendix QH Chami. What a great way to head into Spring-you know, the kind with warm temperatures and whatnot. We've had the April showers thing covered for awhile now. Good job, Bubs.