So after keeping my organization in limbo for approximately 5 months, the State, in its infinite wisdom, has "officially" decided to de-fund us for fiscal year 2012 as of September 15th. My last day at work is Friday. Nice notice, right?

I (and my co-workers) pretty much knew this was coming, but there was that glimmer of hope that everything would be ok and funding would come through. Not to be. I've been with that organization since it started, from the ground up, 7 years of blood and sweat and tears, wah wah woe is me.

I've sent out about 10 resumes in the last 3 weeks or so. I got my first rejection email this morning, for extra bonus awesome!

Anyway, I'll continue searching, obviously. I'll collect unemployment (which is about half of what I was making). Kyle and I are cutting back even more than we were before, and we will be ok for a little while. I'll get some time to decompress from this shitty limbo-state of uncertainty, wash some horse blankets, get the yard ready for winter, and of course lots of this: 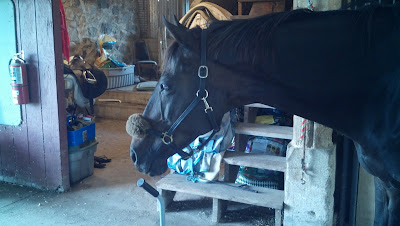 Such a handsome head.

It's not all bad. Kyle says to focus on finding what will make me happy. I've heard the saying, "Do what you love, and the money will follow." It's a nice thought, but I'm so disillusioned with the economy in this State I don't know. I'm worried I'll end up taking something I hate because, um, we need dollars. Worse I won't even be able to find a job I hate that pays what I was making, and I'll end up working at Speedway. (Aside: If I have to work for 8 bucks an hour, I'd rather at least work around animals; a pet store or something. I'm actually really fascinated by animal nutrition and pet care, having owned just about anything with fur at one point or another, and I don't think it would be horrible.) The rejection letter I got? Says they received hundreds of resumes for this one position. It's tough out there. 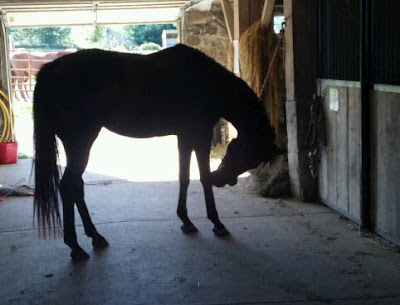 Of course, leave it to Miles to be my bright light. He has been working so, so beautifully the last couple of weeks. Friday and Saturday I took him over cross rails for the first time in a month or so. We've both missed them and it sure injected more joy into our ride. Saturday I raised the rails up so the middle was just under 2 feet. I know, I know, we're CA-RAAAZY! It was fun to feel him actually use himself to jump though-thank goodness I had the presence of mind to grab mane the first couple of times. He's so adorably pleased with himself when he does a good job, too. Love my boy. How can any situation be all bad when I get to drive out to see this more often? 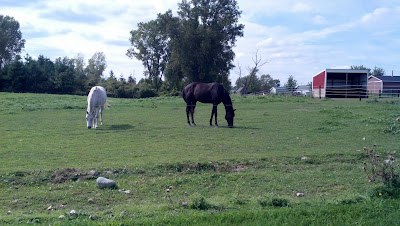