Miles is getting the day off today. It's approaching 90 degrees outside, and since I'm pretty sure there's going to be firework action we will be able to hear and smell at the barn, I'd just as soon stay home.

He's been getting worked quite regularly this last week. I decided to experiment and shortened my stirrups a hole (let's face it, while I really WANT to ride dressage, I'm in an all purpose/close contact saddle! It's a Custom Saddlery Revolution that I got for a song since the line is now discontinued), and WOW did that feel good. My base of support is so much more stable. I wish I was strong enough to have slightly longer stirrups, but whatever, right now I need to work with what I've got, and that one hole makes a big difference. Great thing to discover right before the show!

Yesterday I was short on time so I thought, "Hey, we haven't had a lunge session in quite awhile, let's do that. Let's make it super-fun and do it in the scary area of the farm where Miles pulled his Michael Jackson (thanks for that phrase Kristen!) Hot Move (MJHM) when I bit the dust and see if we can't get that TB brain of his to sloooooow down and think, as it does so well in the arena."

So, we're out there in the grass and he's walking-head up and looking around but walking, in a very nice circle around me. I ask for a trot. He takes about ten lovely strides, and then pulls the MJHM. This would not have been a big deal if the damn cheap sonofab*&#h lunge line had not then snapped at the latch under pressure (and it wasn't even that much pressure!), and away he galloped, back to the barn, tail in the air, super duper pleased with himself.

This is now twice he has pulled the MJHM and gotten to run back to the barn. Not good. SOOOOO not good.

Sigh, I collect the TB (who is now snorty and prancy and quite cute, actually, though I couldn't let him know I thought so!), grab new lunge line, and head back to the scene of the crime. 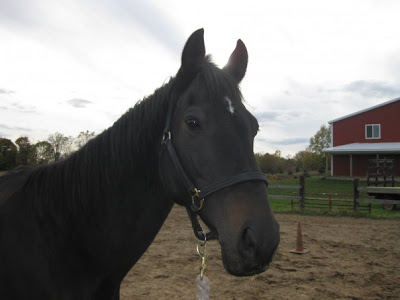 This is his "safe and sane as a lesson pony" face. It is not to be trusted.
I would have seriously questioned my boy's intelligence had he not tried the same thing again. Of course, though, he did, a few times naturally. What was supposed to be a short session turned into something much longer, but actually I felt great when we were done. We're not going to solve this issue in one session, but by the end he was doing walk trot transitions with his head down and licking and chewing. Good good good boy. I wanted him to actually relax enough when we were done to graze a little in that spot, but he preferred to stand and look around, and honestly I didn't have the time to stand with him and wait.

Anyway, I'll be riding tomorrow and Tuesday of course (no matter how hot it is, ugh), and then Wednesday is our Big Day! Hope everyone has a wonderful Fourth of July, and that your animals get through it sane, safe and sound. Lebowski hates hates HATES fireworks, but luckily they make drugs for that:) 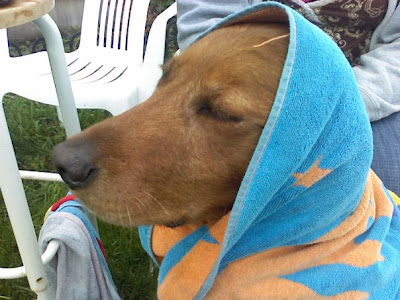