I know I said I didn't want to post pictures, but I'm going to anyway. I took these last night. 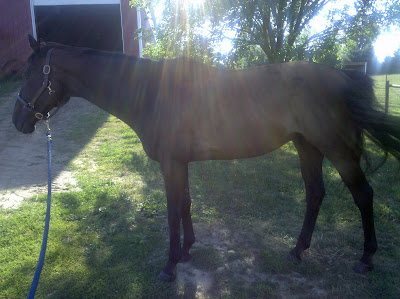 I thought the sun was really cool in this shot...well, as cool as a picture can look taken off of a cell phone. 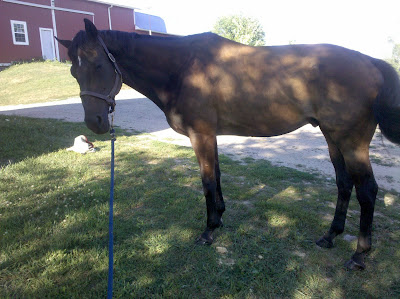 I think he was in a food coma for these-he had just finished his dinner of beet pulp AND grain (his pail was thisclose to overflowing) in addition to about a half scoop of alfalfa cubes.

He was very sweet yesterday. When he slowed down eating his alfalfa cubes, I picked up the pail and held it for him, just to see if he wouldn't eat a few more. He gave me this look-like, "I'm FULL already ma, but you look worried so I'll humor you." and so he did, with a few more bites. I'm sure I'm anthropomorphizing, but I swear some days he just gets me.

I hope he's ok. I hope his new feeding regiment is helping. It's sooooooooo tempting to weight-tape him everyday, but I'm resisting until Saturday, a week from the last measurement.

I wormed him with Ivermectin on Monday (all the horses at the barn are on the same worming schedule), but after talking to Amanda and doing some research I wish I would've waited and given him Zimectrin Gold, which also treats tapeworms. He did get a double dose of Strongid two months ago, which is supposed to also take care of tapeworms, but it's possible he could have acquired the problem since them. Anything is possible, sigh. Mr. Vet Student at the barn is going to check into it though and get back to me about dosing him with the Gold anyway. He's a great resource to have.

Anyway, riveting reading, I know! Cripes, I'm bored just typing this. I cannot WAIT until this is all behind us and we can get back to riding. I know it would probably be ok to ride him now, but I just don't feel good about it. You can't really see it in the pictures but his topline is a wee bony. Awesome, right? Patience, patience, patience. It's been less then a week that I've been tracking his weight and he's been on his new diet, but my god it feels like a month. I guess worry will do that to you.

Everyone go ride your horses if you're lucky enough to be able to. If not, hug them and love them and appreciate them for the individuals they are, and be grateful for everything they bring to your life. That's what I'll be doing.