You know the old nursery rhyme..."Jack Sprat could eat no fat, his wife could eat no lean." That's all I can remember, actually (his poor wife; did she even have a name? Gawd, the patriarchy starts the kids early, doesn't it?;). So, 3 guesses who Jack is and who the wife is in Miles' and my scenario? Bet you don't need the last 2!

The day this becomes a weight loss blog just shoot me. It's something I struggle with and will always struggle with, but I'm not giving up the fight. What's important is that I am getting more fit and increasing my stamina, and Miles has no problems carrying me or working under me. He doesn't flinch when I mount and has shown absolutely zero signs of having back problems...believe me, I am ever vigilant for any signs of his discomfort, and so far so good. Besides, I watch reining on RFD-TV every now and then, and my goodness there are some small horses working very hard under some large men and their heavy tack. In other words, this isn't about me. 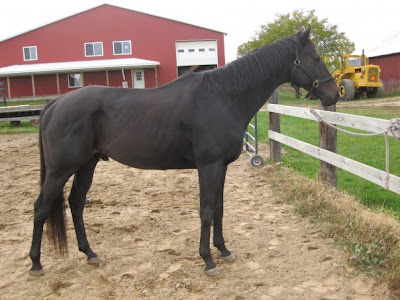 This is my boy in October 2009, about a month and a half after I adopted him. Obviously too thin, the thing that concerns me most is his topline. However, he came to us underweight, and was VERY stressed for most of September; he may have even lost weight in his transition from New Vocations to my barn, so that's mostly what I attribute it too. He was on Du-Mor Weight Gain supplement at this point, which was pretty much worthless to him. I switched him to CocoSoya (oil supplement), he settled in and got a turnout buddy, and this was him in January 2010. 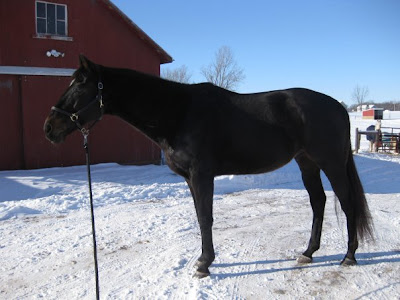 MUCH improved. Yes, he had a winter coat, but not much of one as he was blanketed and coming into a stall at night. I would've liked another 50 pounds on him, but his topline and neck look great. 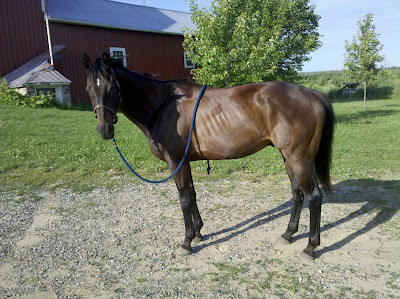 June 2010. Sigh. He's just...not where I want him. Of course, I still think he is absolutely stunning:) And yes, he had just had a bath and was still slightly damp, and the early evening sun was just radiating off of him, accentuating those TB ribs of his. He's not as bad as the October 2009 picture (no bony topline, not as "tucked under"), but his neck isn't as filled in as the January 2010 picture either (though he is in better shape with more muscle than in January). If it were October instead of July I'd be very concerned, actually.

So what have I been doing? He was getting a beet pulp mash about 4 times a week up until a couple of weeks ago, when he and LaShore were moved to a much grassier pasture. Great, great thing, but he stopped being interested in eating the beet pulp whatsoever. He and LaShore have been getting 1/2 bale of hay am and pm, and he's getting about 9 lbs of Nutrena Safe-Choice a day, divided up am and pm. He has been on CocoSoya for the last couple of months as well. I dunno how much that stuff is actually helping him put on weight though. Yes, his coat looks great, but that's not what I'm buying it for! I've also found if it's not REALLY mixed in his feed, he won't eat the really oil-soaked parts of his grain....sigh.

New plan...I picked up some alfalfa cubes today. He's going to be getting about 5 lbs soaked a day (please please please let him eat it!). I also ordered Fat Cat supplement from SmartPak. It's economical and got great reviews on their website.

If none of this seems to make a difference by late August, I guess I will have to call the vet. Trust me when I say he's getting enough food, both forage and grain (although I wish he could get a mid-day feeding of hay as well, it's not possible unless I go out there and do it. Judy, LaShore's owner, does often toss the boys additional hay after she's done riding in the morning, however). He had his teeth floated 6 months ago. Current on his de-worming, and in fact has received double doses of some wormers in the past 9 months as recommended by the 4th year MSU vet student who boards at the barn with his wife. He has no signs of ulcers, other than being a wee bit ticklish on his belly near his sheath area. He isn't cinchy in the least, thank goodness. His attitude is great, his appetite is good (although I noticed the heat has slowed it down a bit these last few days, the weather is supposed to break this weekend). I hope it won't come to this! If it does, however, we will still have some time before the weather gets really cold to treat whatever needs to be treated (if anything) or try something different.

I don't expect him to look like a quarter horse. I just want him to be healthy. If he becomes ill, god forbid, I want him to have some fat stores to draw on.

Anyway, not the most stimulating post, I know, but it's what's been on my mind when it comes to Miles. By the way, I stayed for about an hour of the show (and it was HAWT). I hosed Miles down and took him up to graze and watch the festivities. He was interested but not scared, although he did shy (so mildly I wouldn't even call them spooks) a couple of times. Apparently I am a huge wuss puss because they had a great turnout! The class(es) we would've entered had only 2 riders in them, however. Ah well. NEXT time, come hell or high water, we're getting out there! Miles, ribby or not, is too damn cute not to show off:) 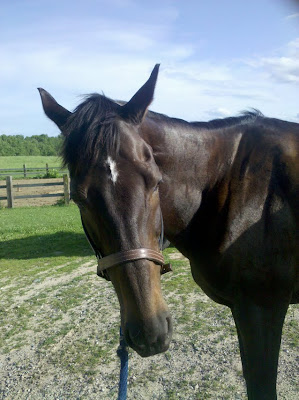 Miles-doesn't know what all the fuss is about.
Also please to note: shoulders in this photo are not as straight as they appear:-) Good lawd that thing looks practically vertical!