Tonight was my first ride on Miles since last Monday, over a week ago. The heat was unbearable last week (well, for me; we've established I'm a wuss, yes?). Then, Miles became Studly Do-Right over the weekend, as a new (very active, very small, very cute) Paso Fino arrived at the barn, and a new mare was introduced to the pasture next to him. Boy oh boy, did we have some fun times! I can't tell you how much I love that screaming whinny in my ear...like music, I tell you. In addition, the bugs have been bad, and I think that's been contributing to his "heightened" state, if you will. He wasn't horrible to work with, just distracto-man, so I did lots of ground work and lunging. It was actually good, and needed. I haven't done much lately and it really is fun to see his attitude change, his brain relax and his attention turn to me. Thanks Clinton Anderson:)

Today was still fairly warm, in the mid-80's, but I suppose we are in mid-July. Miles and LaShore have been switched back to their old pasture, which is great because it gets him away from the mares, and he was 100% amazing. Relaxed in the barn, and honestly the best I've EVER felt him under saddle. He was forward, happy to work, straight, relaxed, submissive, attentive, with no tension in his neck or back-I'm really not exaggerating, he was my lil' superstar. I don't think I'll be switching to the bit anytime soon, as I could bend him and do circles and serpentines, stops and rein-backs with no issues whatsoever. There was no teeth grinding and chewing or twisting of his neck (his favorite move when he's anxious and I'm asking him to stay on the rail, particularly to the right). We only worked about 20 minutes, because it had been so long since our last ride, and we were both hot. It was certainly long enough to make me grin ear to ear though, and bestow upon him many pettings and treaties.

What a good boy I have. I don't know what I did to deserve it, and I really am sorry if I sound, I don't know, like I'm bragging? Look, I know we have so much to work on, and if anyone saw us today I'm sure they wouldn't see what all the fuss was about. I just could FEEL such a difference today, and it was lovely. An excellent Bastille Day ride!

As for the weight issue, it turns out Miles hates soaked alfalfa cubes, siiiiiiiiiiiiiiiiiiiigh. He doesn't mind them dry, but will stop eating them after about half a scoop. So, we're going to do a scoop of soaked beet pulp mixed with his SafeChoice grain (which is now up to a scoop and a half) every day. This is in addition to the FatCat supplement and a little oil, plus upping his hay a bit; I feel really good about this strategy. If there's no difference in a month, there WILL be reinforcements in the form of vets and dentists marched in. Honestly though, especially after his attitude today and our amazing ride, I can't believe there's anything wrong with him, other than a lack of calories. Oh Miles, if I could give you the fat off my ass I would:)

Anyway, that's where we are now. It feels pretty good, I don't mind saying. Thanks for the ride, Bubs. 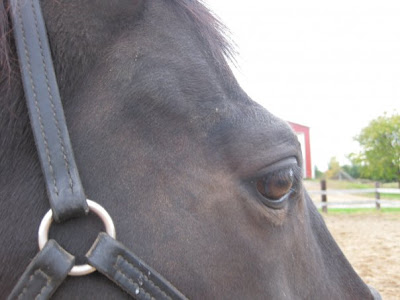