Today I sent my last update on Miles to New Vocations. Three times a year they require current pictures and a detailed explanation of the horse's health, activities and any problems the adopter might be experiencing. All updates are also forwarded to the horse's donor, though I have no idea who this is in Miles' case. If this last update is satisfactory, he is officially mine!

Suffice it to say, this particular update was glowing...I wrote about our progress in training, what we've been up to, our bit experiments and fun with hackamores. I was also very, very honest (ugh, I hope not to a fault) about the challenges we've had with his weight. I told them I was too lax about tracking it up until 3 weeks or so ago, but things are much better now and that particular mistake won't happen again.

And things are better. My boy has gained approximately 25 pounds in just over 2 weeks. Hooray!

There's no reason not to start riding again now. I had every intention of getting on him this week, and especially today, but then I got to the barn and caught up on some REALLY good barn gossip (if there is such a thing...it was really more like interesting information:). Before I knew it an hour had passed, and Miles' still needed to eat his beet pulp, which depending on his mood can take up to 45 minutes alone. Ah well. Tomorrow then. It's supposed to be hot (shocking! I'm so sick of talking about the weather), but after all our time off I'm not anticipating doing much more than a pleasant little hack.

I have been lunging him this last week. He actually gave me a couple MONSTER bucks the first time I worked him, and Miles never bucks. Silly boy. Guess he needed that outlet more than I thought-unfortunately, I can't help but think some sexual frustration is part of it. He and LaShore have swapped pastures with the older sweet haflinger stud, which means Miles is now right next to a harem of sex-ay mares, and the gelding who lives with them and lurves them. So far, it's "okay", though I was less than thrilled when I turned him out the other day and he ran over to the fence, squealed at the gelding, and then pawed at the wire fence and actually hit it. UGH, MILES, you damn fake stud! I yelled at him, he looked at me like, yeah?, and then proceeded to graze like everything was cool. So, I'm sure things will be fine now that they're settling in, but I really, really don't want to get a call saying my horse has cut himself all to hell on the electric fence.

Anyway, it's been a long time since my last post as there's not been much on the Miles' front to report. My old dog Mojo did go to the vet last Monday, where he preliminarily diagnosed her with a tumor on her thyroid. Monday was a very bad day. THEN, said tumor shrunk, literally overnight, and Mojo's blood work all came back normal...very, very good signs, but then what is this thing on her neck?? Vet was reading to me out of a textbook when he called me...yeah...that's all I'm going to say about that.

I'm hoping it keeps shrinking and goes away, but unfortunately it does not seem to be-after the initial reduction, it has stayed stable in size. It's still there, but she's not making all those weird guttural noises and is acting perfectly normal. If it gets bigger or anything changes, back to the vet I suppose. She IS 14 years old...who knows what weird things can pop up on ancient dogs.

Cat-Butt also seems to have the equivalent of a cold the last week or so. Thought she had a hairball or something, but then the sneezing and runny nose and flemmy whatnot started this weekend. Why why why always on the weekend?? Ugh these animals...I want to stop worrying about them already! Kitty is up to date on her shots, and I remember she had something similar some years ago...when we took her to the vet, she was fine and he couldn't find anything. We'll give her a day or two more and if it's still bad it's her turn for vet fun. Still reeling from the 300 plus vet bill on Mojo, so I'm hoping Kitty's immune system kicks into gear like, now.

On a more pleasant note, here are the pictures taken of Miles this afternoon that I sent to New Vocations. Not the best, and they are off a cell phone, but I'm finally starting to see the improvement with my own eyes. I will take it! 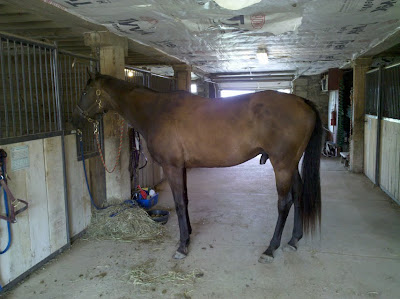 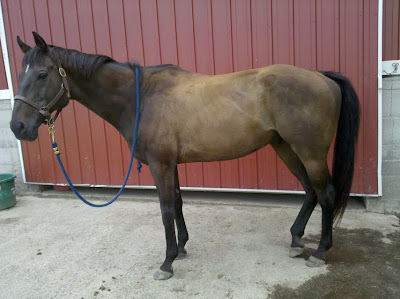 Still not as much muscle as I would like to see, but not so horrible considering he's been on temporary layoff, as it were. His face is cute here...his bleached out coloring (on his body, but not his neck, natch), not so much. 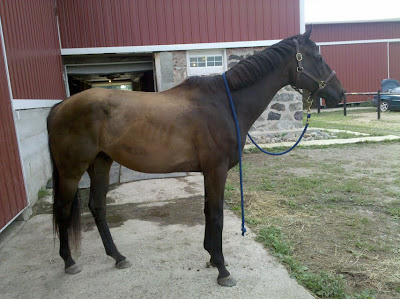 Final pic...ribs a bit more visible, but still a vast improvement. I think he looks quite cute and compact here...I need to get back in that saddle already!
Posted by Sarah at 7:49 PM