Miles was Aces tonight. I started by lunging him in the end of the arena where he had his mini freak out on Saturday. After one tantrum where he tried his whirly-stop-run-the-other-way (very poorly and lazily, I might add), he settled down and lunged like a champ. I got on, and because I'd lost my crop (recovered!) and Miles wasn't the only one feeling a little lazy, we worked on trot-walk transitions and bending in small circles. We worked all over the arena-he was a leetle dead to my leg but we worked it out and he was listening by the end. It was warm outside, but he was just barely, and certainly not sweaty.

Enter Ashley, a recent grad of Michigan State's Veterinary Program and a great rider; she's ridden horses I'd never dream of throwing a leg over and does 3 day eventing. She was there to teach a lesson and they got into the ring as Miles and I were finishing up. She remarked she wanted to see Miles move and was sorry she got there when we were done, so I said..."Do you want to ride him?". I have NO idea why, it just sort of popped out! I'd seen her ride lots of other peoples' horses at the barn and I knew she was a good rider, so I had no qualms about that. Still, it's MAH BAYBEE...I might be just a wee bit protective of him and my uber-sophisticated training techniques that I've instilled in him lo these many months (ha ha). I hadn't seen anyone else ride him since before I adopted him...so yeah, I was curious. I told her I had just a little time, and she grabbed her helmet and hopped on.

You guys, I was SUCH a proud mama. He was adorable at first-I wish I had a picture (OK, any picture at ALL of him being ridden. Next time!) of his sweet, confused face when she mounted up and I was still standing on the rail...he definitely knew something was up. He wasn't perfect, and he did test her a bit, but the worst thing he did is break into a couple canter strides when he got anxious or really tense (usually when her dog was running amok around him). Then, however, he'd relax and try to do what she asked. He's so game:) She did a LOT with him in 10 minutes, including a canter in both directions. She's a good rider, as I said, but she's...firm, and he wasn't getting any of the many walk breaks he's used to with her. Her contact with the reins was shorter than I ride with, though she didn't pull back inappropriately or anything. I ride with less contact because he does have that hackamore on, but he only seemed bothered by it a few times. Also, her strong leg was ON, always, which is good riding, especially when he was trying to avoid bending, but he wasn't getting away with ANYTHING with her (not that he can when I ride him, but you know what I mean). Anyway, Miles did great, and she said after she was done, "He's nice Sarah! Good catch!". Who doesn't like to hear that their pride and joy is a good boy after all?

I was relieved he had done so well, and hadn't given her any major problems...I wasn't sure how he would handle it. He was warm and a little sweaty when they were done, but it was mostly because he worked the whole time, not because he was tense. The most important thing, to me, was he was in a good mood and I think pretty proud of himself, as he jigged back to the barn for the first time in awhile, his neck arched and ears up, the eternal dorkus:)

We also got his new Schneider's lightweight blanket in the mail, finally! I think he looks like Bat Man in it:) 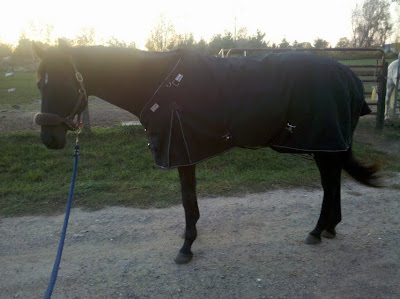 Super Hero Milez works so HARD. Return him to Bat Cave to administer treatings plz.
Posted by Sarah at 8:15 PM