Room With A View

Hey! Hello! How is everyone? This is certainly the longest I've gone without posting since I've started Miles on Miles. Kyle and I went to Buffalo for a few days, but really I just haven't had a ton to say lately. Things are good. Old dogs and grandmas are doing amazingly well. So is Miles. Speaking of.... 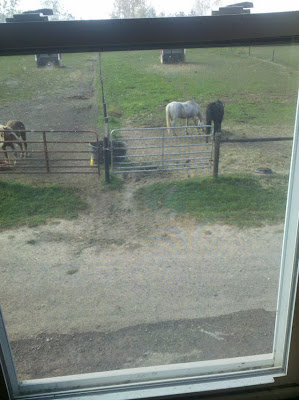 This is the view from one of the windows in the "lounge" area of my barn...it's really just the upper level of the main barn, which is really nicely done with a bathroom, pool table, lots of heads of dead things on the wall (ok, not my favorite part, admittedly). Anyway, I usually throw my boots and chaps on in this room, and then strip them off here after a ride. I don't know why, but one of my favorite things to do is to go over to this window, which overlooks Miles' and Lashore's (and sweet Wayne's, too) pastures, and watch Miles graze before our ride or eat big mouthfuls of hay I throw him after we're done. I took this picture today after our ride. I know it's not much, but it makes me happy. I always, always am in the best mood after our rides. This afternoon was no different.

Today was no picnic either. It was an absolutely gorgeous day, ridiculously warm and sunny. I figured I'd have a lazy Thoroughbred on my hands and almost didn't lunge him, even though our ride last Wednesday was our first ride in almost a week. At the last minute though, I grabbed the lunge line and whip and out to the arena we went.

There is no shade in the outdoor ring. It was hot. I planned on lunging 2 to 3 minutes each way and then getting on. Naturally...well, best laid plans and all that. There was a group of boarders out on a trail ride, which he must have heard before I could because he was giraffe-neck-OTTB for the first 5 minutes of our lunge. I was lunging him in the "comfortable" end of the arena (near the barn and his pasture), but he was fixated on looking at the other end. I figured what's the point of lunging if we're playing in his safe zone and he's still tense (though at this point he wasn't doing anything wrong; he was just rigid and looky-loo), so I walked him to the other end and had him start walking a circle around me. Hoo-Whee, the fireworks that ensued!! The trail riders finally emerged (naturally from the trail head on our side of the arena-the skarreee side!), and he was legs akimbo, trotting, cantering, trying to gallop, bucking, farting, you name it. Of course, lots of blowing and pulling on the lunge...poor boy just wanted OUT of that area, back to his safe space.

Did I forget to mention his pasture-mate LaShore and Judy were also working in the arena? Pshaw, it didn't matter. Those horses and riders might as well have been sent from Mordor (Lord of the Rings reference!!). So, they rode up the trail head, almost got to the arena, then turned around and rode back into the woods. Awesome (not awesome). Poor Miles continued his giraffe neck, wide-eyed trot/canter/trot, with the occasional walk thrown in. Keep in mind the whole time I'm talking to him, cooing at him, telling him he's a good boy, la la la. Then, he would do his ridiculous bolt and buck, and I can't have that. I would send him forward for a couple laps and then ask him to come back to me. FINALLY, the trail riders came back for good, Miles got a good look at them and realized they weren't demons from the underworld, and he dropped his head, took a big breath and relaxed.

I know this sounds like a long time, but it was maybe about 20 minutes of actual lunging. Poor boy, he just worked himself up so much...I know he doesn't actually like being scared and tense. I let him walk walk walk, threw his hackamore on and got up. We rode almost exclusively in the scary side of the arena, and he was just fine. Sweet Miles...I suppose he has to have those brain-less moments every once and awhile. I will say he was a perfect gentleman under saddle, though I mostly walked and did a few trot transitions. He had already worked way harder than I wanted him to in the heat anyway.

I think he may be getting a bit full of himself-2 people at the barn, at different times today, told me how beautiful he's been looking in the pasture, with his cobalt coat shining in the sun. I fully intended to take pictures today of him in his gear, sporting his MSU saddle pad (he he, what a game that was today:), but the lunging took it out of both of us today. You know what was cool though? I was laughing at him-every time he would spook or buck or fart, I couldn't help it! I thought he was hilarious. Now, if this was a regular occurrence, I'm sure I would not have been guffawing quite so much. Still, it's not a reaction I would expect from myself in this kind of situation with my horse. Annoyance? Irritation? Maybe a little fear? Sure, been there. Gotta say, though, a sense of humor with OTTB antics is waaay more fun...for both of us.

Anyway, after we were finished, instead of taking all kinds of fun (for who?) pictures, I stripped his tack off, turned the hose on him, and put him out in the pasture to roll like a fool, which is what he loves and is exactly what he did. Hence, these are the only pictures I got for the day...hey, you can't plan everything. 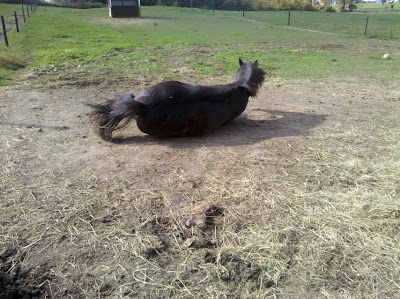 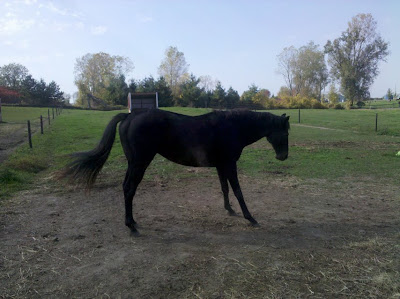