Could it be I'm actually learning lessons and retaining information as I work with Miles? I would never call myself a horse trainer in a million years, but I might just be competent enough to train one horse in particular.

*Note to Universe-the previous statements and all statements to follow should in no way imply that I know what I'm doing at all; in fact I still need your good karma on my side. Still very humble, just so we're clear. Thanks a bunch.*

So, today was a really nice fall day-sunny, about 55 degrees, with some wind. Now, this "wind" is nothing at all like we've had this past week, but it certainly was enough to make Miles a bit fresh and me a bit wary. I especially loved it when the air was very quiet and then a 40 mile an hour gust came rushing up out of nowhere, usually when we were in the skeeery side of the outdoor arena. But I digress.

I was determined to ride outside no matter what today, so of course that meant out came the lunge line. There was a little fun show at our barn last Saturday, and naturally to make things more interesting a bunch of poles, jump standards and barrels were stacked in one corner of the skeeery side of the arena. No matter, I figured, we shall lunge past it until he realizes this is no big whoop (his eyes were just glued to that corner as soon as we walked into the arena, which was my tip off he was going to have issues).

I started off lunging him in the "safe" side of the arena, which also has SO much better footing-I have no idea why, but the other side is very deep, like we're going to be having reining competitions down there or something. Anyway, Miles starts off fine, but of course as we move closer and closer to the other end of the arena and the Jumping Equipment of Death, he gets more and more agitated. He starts dropping his inside shoulder as he gets near the equipment and doing his infamous bolt and buck-not every time he passed it, but enough.

Fine, I say. Miles, I shall walk you up to the corner of doom my own self, like you're a wee baby. He snorted a bit, but he sniffed everything and stood placidly after he realized these inanimate objects were not, in fact, going to attack him. Super, I think, let's do a couple small lunge circles in each direction down here and we will be good to go.

Sigh...at this point I think Miles was just enjoying his "drop-shoulder -run-away" hot move when he got to that corner, so that's exactly what he did, again.

Can I just say how happy I am that I have other tools in my arsenal for times like these? I learned the "sending exercise" from Clinton Anderson....basically I point with one hand, indicating Miles to move in a certain direction, and urge him on with my other hand holding the whip. After he has been "sent" past the corner, I say "whoa", yield his hindquarters, and repeat in the other direction.

I know, it sounds simple, right? Maybe I'm just slow, but before I learned this exercise, I would have NEVER thought to do something like this. I might have either continued the fruitless lunging (and Miles is naturally lazy for the most part, so that might have worked eventually), or I might have led him back and forth past the corner myself multiple times. The problem with that is I'm right there with him; I can lead that horse pretty much anywhere and he will follow me. It's when he has to go somewhere on his own that things can get sticky.

Anyway, he immediately relaxed after the first couple "sends". And what do you know, after that I certainly could lunge him past the corner with no shoulder dropping or rushing at all. I don't know exactly what it is about that exercise (maybe the yielding the hindquarters bit?), but it was just what we needed. I also backed him up quite a bit prior to starting the exercise, which I think helps all horses when they're feeling silly.

The best part was this was all done at the walk, and there wasn't a drop of sweat on Miles...his behavior change was not due to fatigue. I also didn't feel irritated or frustrated with him once, even before we started the sending exercise.

What do you know? Brains win! We went on to have a great ride, and a great day. Say what you want about Clinton Anderson or some Natural Horsemanship, but after riding for 20 plus years under many different instructors, I never was taught anything like this to get a horse past something he's scared of. That's not a knock against any of my instructors, just some praise for CA, and the fact that as riders we CAN work things out on our own...as long as we stop and think. 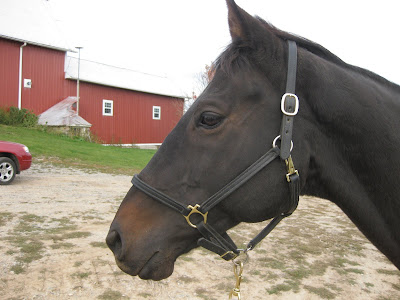 Sweet Miles, teaching me not to be so dumb for over a year now.
Posted by Sarah at 11:06 PM