Oh, we've not done anything crazy in the last week or so-but Miles has become Mr. Steady, Mr. Reliable, Mr. Pull Me Out Of The Pasture After A Week And Ride Me...which is exactly what I've needed lately.

Also, this horse LOVES jumping. Loves it. When he's being a little lazy (or it's like today, 85 degrees and muggy), I can point him at our little crossrail and he instantly becomes forward (but not rushy), and is now consistently jumping the obstacle from a trot and cantering away. I don't care that it's a teeny tiny...it's added so much to our rides. It's been lovely.

The not so great news is that he's lost a bit of weight in the last few weeks. He's quite sensitive to bugs and heat so I'm pretty sure that's all it is. I've also not been at the barn nearly as much as I should be this time of year (though I would if I could have) to feed him his Speshul Miles' Mish-Mash of beet pulp, alfalfa and apples. He's been scarfing it up, and it's great because it gets some additional water in him as well. Our barn owner is aware and he's getting a bit of ration balancer in addition to his regular grain-which we've switched (again), from Purina Strategy to Tribute Kalm and Easy. I actually really like everything I've heard about this feed and their rep was great, so I hope it helps. Miles is also nowhere near as ribby as this time last year, but I don't want him ending up there either. I'll keep you updated.

Item! I've been blogging about Miles officially for over a year now. I had no idea I would have enough nonsense to write about for so long, but there it is. Posting has slowed down considerably in the last month or so, but I've found these things ebb and flow. Also, I suck at taking pictures-I need to remedy this because sometimes you can write paragraphs on the right photo:)

Item! Looks like Miles and I will be featured in New Vocation's summer newsletter. I think it's just going to be a blip among other updates from adopters, but still I'm so excited!!! Even though we aren't one of their "success stories" that have won tons of ribbons, when I was looking at horses a story like ours is exactly the kind of thing I would have wanted to read. You know, about a horse who busts all the "Crazy OTTB" stereotypes, who is full of life and love, sound and barefoot, and who is a true partner to his totally smitten owner. I'll let you know when it's out.

Thank you to everyone who sent a comment or an email in the last few weeks. It's been tough, but you all bring a smile to my face. Happy June Everyone!! It's my favorite month, especially to ride. Enjoy YOUR partner. 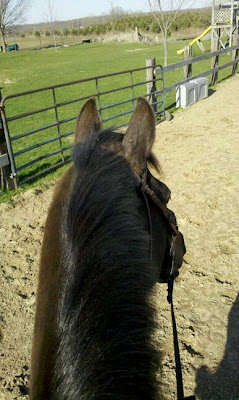