Just a quick update...the last few days were Hades hot, for real. I was swamped at work, and on the road a bit, so Miles got a respite. Today, however, he was back in fine form, and we had a lovely ride in 76 degree weather (we Michiganians are slightly obsessed with the thermometer. Does it show?).

There was a lesson happening in the arena while we were working, and various spooky things about because there was a fun show at the barn on Tuesday. At the canter, Miles tried halfheartedly to react to a mini-American flag in a bucket on the rail. He was so lame about it I had to laugh-is there such a thing as a lazy spook? Because I'm pretty sure that's just what he did. Maybe he's a Commie. Or just a proud Chilean:)

Miles has been tripping a bit, which I noticed over the weekend and again today. It's not horrible, but enough where I need to talk to our farrier about it in 10 days. He's also got a small to medium chip or beginning-chip in 3 out of 4 hooves, so I think his feet are just growing super fast thanks to all our wonky weather; super wet to super hot and dry...I think it's messing with a lot of pony feet. He's sound, just...clumsy. Anyway...

The BO set up a small vertical (which we've never done under saddle) on the diagonal for her student, as opposed to down the long-side like the cross rails we've been jumping. I thought what the heck-he was in a nice trot so I pointed him at it. His ears and head went UP, but I kept Lucinda Green's voice in my head; "Act as if your horse is a sandwich, and your legs are holding him together. If you squeeze too much you'll crush your sandwich, and if you don't squeeze enough everything falls out" (or some variation of this quote). I heart Lucinda Green so much. I also heart food metaphors-don't ruin my sandwich, legs!!

So, I supported him with my leg, and he JUMPED (like...JUMPED) Mr. Tiny Vertical...Good Boy!!! Somehow my position was strong enough to stay right with him and I remembered to grab mane. He was so pleased with himself, cantering away with just a slight toss of his head. Rightly so, natch:)

Did you know I love this horse? 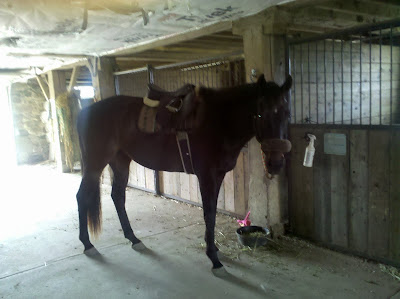 This is the Droid you were looking for. Take him to your verticals.
(Milez iz owned by a nyrd.)
Posted by Sarah at 9:18 PM