Had an interesting ride today. It really cooled off, and Miles and I rode in temps in the mid-60's for the first time in...well, it feels like months. So he was a bit up and fresh, and very looky-loo, but still had a brain in his head. I decided to hand walk him twice around the arena, turn on "The Twilight Singers" on my phone (I don't know about Miles, but listening to Greg Dulli makes me feel invincible), and hop on.

He was a bit distracted, and not really into the whole riding around the ring in circles and serpentines bit. Could it have something to do with the fact that I wasn't either? Hmmm. There was no one to go trail riding with, which is too bad because it would have been a perfect day for that, especially because I think I saw 2 flies all day.

Instead, after riding for about 15 minutes and making sure we executed all 3 gaits in both directions, I pointed him at the cross rail, set up on a diagonal as the vertical had been on our last ride. We trotted it a couple of times, then cantered it each way-and there was such a profound, amazing change in both of us. Miles stopped looking all around, rushing in this corner, stalling in that corner, and just generally tuned in to me and what we were doing. I stopped feeling like I was constantly asking him for forward impulsion and engagement he wasn't offering. That's the great thing about jumping (and again, keep in mind I'm talking about under 2 feet at this point). It changes our whole ride. After going over that cross rail, his trot got BIG. His canter transition was there, BOOM, instantly. I think we cantered it about 5 times-the first 2 times we got a slightly short spot, though I wouldn't call it a chip. The 3rd time we got a long spot, but I LOVED that I asked him to take it and he did. The last 2 jumps were perfect.

OK, hyperbole in writing, blah blah blah. If anyone actually saw our riding (especially before we started jumping)-look, it's NOT perfect. I know that. What it IS is perfect for ME, for what I'm asking of him at this stage of our partnership. Not always pretty riding, but he's always trying-and that's all I can ask for at any time. He's happy in his work, and that makes me happy. It might not be perfect by most definitions, but it's perfect enough for me. Hey, I've never been accused of being type A:) Plus, look at these MUSCLES! 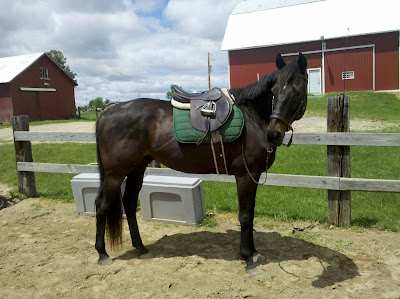 Yeah, I'd like another 50 pounds on him, but I think our work in the last month is paying off. Natalie at Retired Racehorse pointed it out on Facebook, and she's right. His butt is way more impressive than it was 6 months ago:) Thanks for the big ups, Natalie! 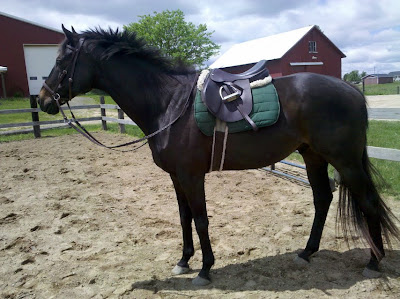 Facing the other way, with a punk-rock hairdo. I'll always love that neck of his, muscled or not. 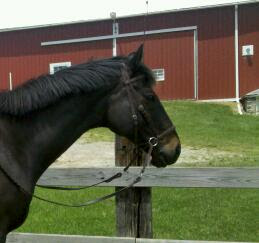 Modeling his very own Dr. Cook's, which we both love. Never going back to a bit again, no matter what. He's doing even better in his very own, that I can adjust to fit his face perfectly, and there is Zero leaning with the noseband sitting just a bit lower as it should be. Make no mistake, I can still "collect" him-in fact, if you haven't already, go read Fugly's latest blog-beautiful example of bitless riding. Passage, Piaffe-you can do it all without a bit. "On the bit" is really just collection, and you don't need a bit for it. Believe me, I hate the feeling of a strung out horse as much as anyone-I've never felt more connected to Miles than I have in a bitless bridle. 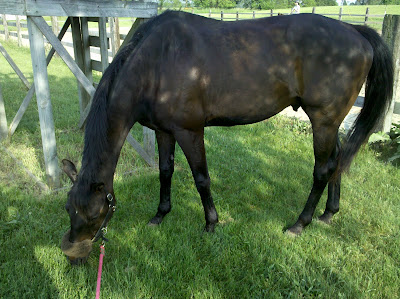