Y'all, I love my pony. I love him so much he makes me say y'all, and I was born and raised in Michigan. Some days I feel like I'm 14 again and am constantly high because my parents just bought me my first horse. Even better, because I'm a grown up (ahem, despite a previous post's evidence to the contrary) and I'm doing this all on my own.

Miles was a superstar on Sunday...really, another one of those "top 10" rides ever. What made it even better was I had witnesses. Normally I hate hate hate riding in front of people (not the same as riding with other people, which I normally love in the right amounts), but it was a gorgeous day and I wasn't about to retreat to the indoor ring just because a few ladies were chatting rail-side at the outdoor-it's my own insecurity, really. So ride I did. 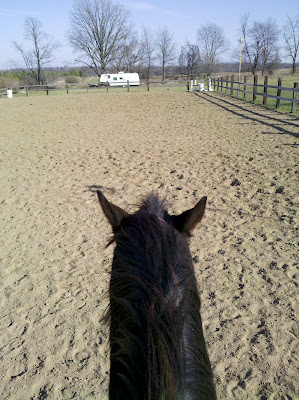 Best view ever. Wish I had a pair of forward ears, but I'll also take the floppy, listening kind.

We (well, Miles), got some very nice comments about how soft he is, how relaxed and how happy he is in his work. One person said she never really liked Thoroughbreds (!?), but she likes him. Okaaaay....Miles can be the ambassador of the breed, I guess, helping to change one mind at a time. While I think he is super-special, more OTTBs are like Miles to one degree or another, and less like the fire-breathing stereotype. 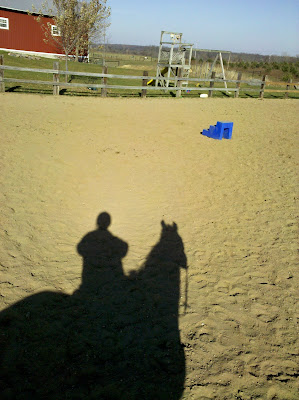 There's those forward ears! Also, this is me turning sideways to take a picture, with my arms up. Not me wearing a hood with gigantic boobs. Kyle assured me no one would think that but apparently I'm worried enough about it that I need to add a disclaimer. Plus he's a liar, proven fact:) I say this with love.

I also have a new farrier trimming Miles' feet now...and he's wonderful. He's correcting a lot of things our previous farrier ignored (and I fully blame myself for not seeing the imbalances sooner). As a result, Miles is moving much easier and freer, and I'm able to ride him without using his Simple Boots. Before, he would trip all over himself without the boots, and now he's just fine, thankyouverymuch. I'm excited to try him over ground poles and maybe a cross rail or two (eek!! I am SO geeked to try that!) now that he is being properly trimmed to see if he doesn't pick those feet up much easier.

After our ride I snapped one more picture, just because he's so dashing under tack. 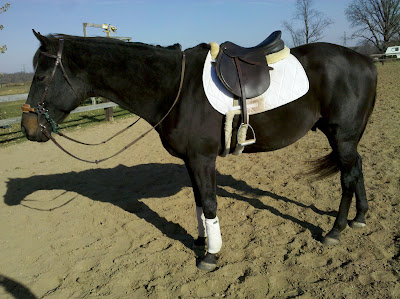 He really is, even if his mom sucks at photography and can never get the angles right.
The cherry on top of my Miles adoration sundae came Monday night, after literally dragging myself to the barn (time changes are always hard on me, whether it's spring forward or fall back). Miles and LaShore were at the far end of their pasture, and for once didn't see me pull in or walk up to the gate since they were up the hill and behind their shelter. As soon as I called "Miles!" I heard the loudest neigh and a thunder of hoof beats as the boys appeared, cantering happily down to great me. It made me laugh hysterically...and then start waving the lead rope like a lunatic as they got close and weren't stopping, yipe!

Stop they did, though, in a cloud of dust and tossing heads...it was so, so adorable (I have got to get a video of it one of these days). If I could bottle that feeling I had...well, in the equine world, there's just nothing like it. When your horse greats you like he's the Black and you're Alec Ramsey, like something out of a novel, it just doesn't get any better. I love the bond we have, and after over a year together I'm still discovering new and awesome things about him. Miles is an amazing gift...sometimes I think he's the whole the reason I was a horse-crazy kid. Maybe I've been waiting for him all along. 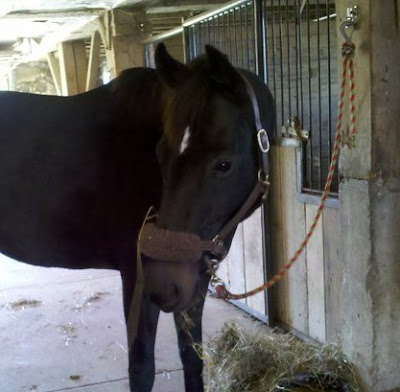 Hmmm, so where's the "Masarin-Miles", famous OTTB Breyer model? I think I need to start lobbying.
End smooshyness! Thanks to everyone for reading, and for letting my inner goober run amok for awhile. Just try to imagine what Miles deals with;)
Posted by Sarah at 6:58 PM