So sorry for the bad pun. I'm a perverted juvenile at heart.

First thing's first-I have an Etsy shop! Well, my husband and I do, since I'm about as creative as a rock. Thankfully, the husband is handy, and has made some beautiful stall signs for myself and some of my barn peeps. I thought why not share with the masses? Check out our store, and if you would like a gorgeous wood plaque for your horse's home (or your own), want to support our struggling household, and keep Miles in all the sugar cubes to which he is accustomed, consider putting in an order. MichiganWood is the name of our store-here's some of the signs we made for Miles and his best mate-I think they turned out splendidly, though we're still working on the wood burning. 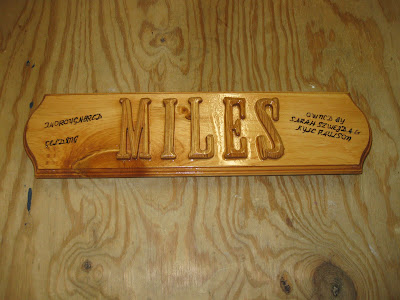 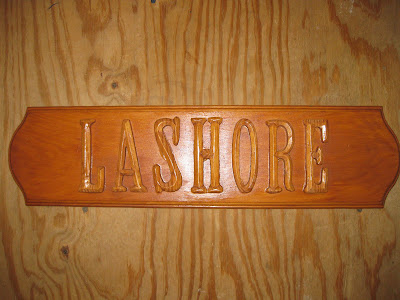 In other news, Miles Loves Miles. Is anyone surprised by this? Two of at least a dozen mirrors went up in the indoor arena this weekend. Miles gawked and snorted and sniffed at Mr. Tall, Dark and Handsome in front of him. He proceeded to check himself out every. single. time he passed his reflection...I don't know if he was flirting with his doppelganger or just puffing up to make himself look even more gorgeous, but he was a world-class show off for sure.

As we would approach the mirrors, his step would get quicker and quicker until his reflection came into view, where he would then immediately slow down and pick up his feet a little higher, with ears and tail at full attention.

Seriously, how can you not laugh at such ridiculousness?

I love my goofball. He's still feeling his spring oats, for sure, but he's brave and bold and forward and feeling great, which I can hardly complain about.

The bitless bridle has been a fascinating experiment. The first day we really rode in it, at all three gaits, Miles was more forward than I've felt him in a loooong time. It was great, for sure; I think the hackamore was/is more nose pressure than he needs, and he may have been a little worried about really pushing forward in it (or it could just be Spring, the jury is still out). Still, his little engine was working overtime, not to mention his out of shape rider. It was kind of fun, though, I'm not going to lie, when he would break into a canter on a circle because he was chugging along so well. Probably not a great thing to let him do all the time, but when he's that forward I want to encourage it, even if it's a fluke. The downside to the ride? He was very stiff, and we struggled a bit in our corners and I ended up doing a whole lot of circles and leg-yielding to get the little Engine That Could listening to my aids.

The second ride with the bitless was the day the mirrors were installed, so that was fun all on it's own:) Still, after a bit of lunging, I felt confident enough to mount up. He was spectacular. His motor was considerably diminished, probably due to the fact that he wanted to check himself out for as long as possible, but he was listening to my aids so much better.

I've found he's a bit heavy in my hands for the very first time in the bitless as well-I literally haven't had a horse lean on my hands since my first mare Chamie. Well, he's not really leaning on me (at least not a lot), but there's definitely some weight that has never been there before. Interesting.

The Clinic is coming up on the 26th. I'm both super geeked to get some actual instruction for the very first time since I adopted Miles, and terrified that she will order me off my horse before I screw him up for good. Hey, my anxiety these days is rarely rational.

Were you hoping for pictures of Miles checking himself out? Yes, me too. Oh well...I have a feeling he will not be tired of himself the next time we venture to the indoor, no worries there.

Spring is coming...Miles is going to be nekkid for the first time in a loooong time this week as temps are supposed to be in the 50's and up. Whew, it couldn't have come a moment to soon. What a Winter. I hope you all have similar warm days with your ponies to look forward to!
Posted by Sarah at 8:36 PM