Day 2 - The Last Time You Rode and What You Did

But first! My new Country Boots came today!! I love them, though I haven't ridden in them just yet. Y'all...they were $62 down from $245. For girls like me who have large calves (even when I wasn't such a "big girl", I've had beasts for calves), it's criminal not to take advantage of such a deal. Behold!

God bless SmarkPak and their clearance sales. I just treated them with Effax Lederbalsam (my favorite leather conditioner ever-smells like heaven and your stuff will be almost instantly supple) to give them that nice lived in look, though honestly there was nothing stiff about them. I can't wait to ride in them tomorrow.
Speaking of...onward with my 30 Day Challenge and Day 2's question-The Last Time You Rode and What You Did.

Our last ride was Tuesday, and it was...not super. Mr. Miles is foot sore. I'm a little concerned because it's manifested since 1) he was trimmed last week, 2) he has been back on "decent" pasture grass 24/7 (Nothing too rich at all, I assure you. Still, it's much more than he was on previously), AND 3) the outdoor arena has some nightmare footing due to rain/dry heat/more rain, and this is the place he has been really "ouchy". Mind you, he seems just peachy when I rode him on grass and on the trails, but we didn't do any trotting/cantering out there. He was tripping a bit before his trim, but his feet really grew a ton in a couple of weeks and were flaring and chipping, so I just attributed his clumsiness to that, though he wasn't taking these rinky-dink strides like he did on Tuesday. Neither was he on the new pasture, nor was the arena footing as lousy as it is now.

Bottom line-lots of different variables all occurring at the same time practically, but what it comes down to is I have an ouchy horse. For the record, his feet are nice and cool and he's showing no symptoms of anything scary like founder. He was super slow at finishing his mash on Thursday, but I think being out on grass has something to do with that. His poop is definitely greener, possibly slightly looser than before the pasture change, but still what I would consider well formed and healthy looking.

Tuesday, I worked mostly at the walk with him, with about 15 minutes of trot. I worked him in circles off the rail (where the hardest, cakey-est footing was, and where he was obviously much more uncomfortable). We worked on bending and moving him off my leg. We did one canter to the left, his easy lead. I didn't worry too much about forward, and we quit early, for obvious reasons.

So, tomorrow, my game-plan is to throw his Cashel Simple Boots on, which we haven't used in months and months. If the outdoor is still looking awful, I'll try him in the indoor arena first and then try the other if he seems OK. 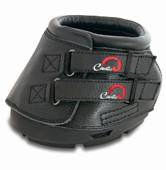 It's a little disconcerting to me that he's so uncomfortable, but I'm trying not to make too much out of it. His farrier has been trimming him for over a year now, and I trust him implicitly. Of course, the other thing I've been turning over in my mind is if we should try front shoes with him. Ugh, I know. I LOVE that he's able to be barefoot, and his feet have been great for the most part, although he's always been a little sensitive to hard, rocky gravel. I'm not anti-shoe if it's the best thing to keep the horse comfortable, but neither do I want to go there until we've exhausted all other options. Do I wish the outdoor arena footing was in better shape? Yes. However, I also want my horse to be able to navigate "most" footing without getting sore. I want those Rock Cruncher feet! I know, I own a TB-it may be asking for a bit much;) Still, we're also working harder than we were even last summer so...I don't know yet.

Hopefully the Simple Boots will do the trick. I'll keep you all updated. In the meantime, new Country Booooooots!!!! Between those and our new OTTB saddle pad that's on it's way, I'm feeling a little gluttonous. My disaster of a work wardrobe can't be put off for much longer either, sigh.

Have a lovely Fourth of July everyone! I'll be stuffing one of our Golden dogs, Lebowski, full of tranquilizers, unfortunately. I've always loved the holiday because it comes with a day off work, natch, but I could do without all the yahoos that shoot off fireworks until 3 in the morning. For like, 4 days straight. 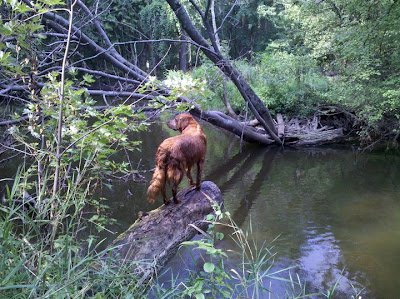 Good Boy BeanPie much enjoys the woods accompanied by water and sweet, sweet quiet.
Posted by Sarah at 7:46 PM