Day 3-Favorite Horse To Ride, Lease Or Own

Hi! Hello. How's it going? Miles and I are great...busy, but great. *note-Miles is not busy.

I've been working and working and doing long ignored house and yard stuff and trying to get to the barn and have neglected all blogging responsibilities, both reading and writing. Alas, those in Michigan and similar climates will understand that we have limited nice weather days, and I'll just be damned if I'm going to spend them inside, much as I love y'all.

Next post to be titled Look at all my new things!! New OTTB saddle pad and boots are gorgeous and fun and super functional, and it's so rare things live up to their billing. Also, we were published, woot!

Back to the title of this post....shall I wax on for 10 paragraphs about Miles again for you? Wouldn't that be fun and different and so out of character for me? No? Then I shall tell you about Chami, Best First Horse Ever.

I'm not going to lie, I didn't save up all my hard earned money to buy my first horse (I was 14-how much hard earned money could I have?). I DID however, work at Fox Brush, previously mentioned awesome barn, and when my parents moved out of the city they agreed to start "maybe" looking for a horse for me, since it was obvious the HB (Horse Bug) wasn't temporary.

You know how they say never to buy the first horse you look at? Terrible, ridiculous advice.

Because Chami (short for Champagne on Ice) was the VERY first horse I looked at. I still remember the first time I saw her, with her head peaking out of the stall. It was quiet and dark, a winter night in Michigan, and she was squinting her eyes against the lightbulbs. She was a solid bay appendix QH, 15.1 hands, 8 years old, wearing a navy cotton sheet. I loved her instantly.

A girl at the barn rode her first for me to see her movement, and she kept smiling as she trotted around the arena, saying over and over "This horse was made for you." She was.

We moved barns, but I continued to show at Fox Brush in their schooling shows and hunter paces. We did High School Equestrian Team. We took dressage lessons. We kicked ASS in the 4H County Fair jumper class (even though we never won anything else at fair-showmanship can bite me). My favorite show memory with Chami came after the jumper class when the judge called the competitors back to the ring before awarding ribbons. She said, among other things, that there were some horses she saw that made her want to start riding again. We won that class...though I don't know if I would have remembered it so well if that awesome judge hadn't given a bunch of ragamuffin kids some great feedback (like, ahem, do up your jacket before walking back into the ring to be addressed by the judge, Sarah, you slob). Anyway...good times.

Aside from the shows, I took Chami down countless roads, through trails, to county parks, over golf courses (awesome) and jumped her over just about everything including picnic tables. She was the best.

I, however, turned into a shitty college kid. I started riding once a week, if that. My heart was totally not in it anymore, and she was too good a horse and still too young to sit around. She became a (very occasional) lesson horse for the folks at our barn, Crestview Farm, where she lived most of her life with me. Then, sure enough, a young girl fell in love and bought her.

I saw Chami for the last time about 4 years ago, at a nearby barn where she had moved to. She was sleek and fat and happy. I emailed the barn every year or so just to see how she was-and don't think that when I wanted to start riding again, I didn't harass the new barn owner to see if there was any way she would be for sale. There wasn't. Isn't that the best, though? To hear your horse is so loved, there's no way she would be for sale again? I think so.

I didn't hear anything back on my last email...she would be 26ish now. I kind of don't want to follow up. I wish I would have kept her, even though I know everything worked out for the best. I would love to ride my old girl down a trail, her phobia of cows notwithstanding;) That was seriously her only fault. Well, that and refusing to load occasionally. Not too bad in the grand scheme.

Whatever happened to her, or didn't, I know she has had great homes her entire life. Her original owner before me is now our dog's vet. How great is that? We talk about her every time I see her. Everyone who knew Chami loved her, that's the truth.

The last time I went to see her, I asked a bunch of squealing little girls at the barn where Chami's stall was and they all instantly knew, helped me find her, and told me how sweet she was. I smiled because I knew. I know. 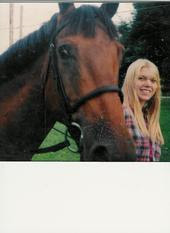 I know I've used this picture before, but it's the only digital one I have of her. Hey, it was the early 90's! My goal is to scan some old photos soon though, so hopefully more of me and my sweet Chami will be forthcoming. Seriously, though? How cute is she? Also note my flannel, dating us both.
Posted by Sarah at 11:58 PM