I thought Miles was footsore. Footing in the arena got better, I put him in boots, and he was still...not right. Better, but not right. He didn't limp, or trip, but he wasn't striding out like he can, even after he had warmed up.

Then, last weekend, he flinched every time I touched his left hip/croup area. Didn't matter if it was my fingertips or a brush, he would suck in and flinch like a fly was landing on him.

Cue me freaking out, thinking he has some kind of muscular issue, emailing everyone I know in the area for equine massage/chiropractic professional referrals.

Tuesday...no flinching or weirdness about the area at all. Huh. What I DID find-deep cracks in his frogs, all 4. Yay, Sarah. You rock.

I swear I'm vigilant about thrush, but it's been soooooo dry here lately I hadn't even considered it. I pick his hooves religiously, but the outside was so "tough" and dry I didn't probe like I should have. When we had one day of rain around here a few days ago, it softened up his frog enough that I saw there were actual cracks there, and lo, they were deep. And, it turns out, quite sore, when I pushed a hoofpick in there.

Miles is getting treated, of course. I use "Pete's Goo", which is a 1:1 combination of antibiotic ointment and jock itch or athlete's foot cream (SO fun buying at the dollar store!). His feet are already looking better after one treatment.

Moral of the story? Your first instinct is usually right, never put it past a horse to throw SOMETHING at you to make you spend way more money than you need to, and always, ALWAYS, probe your horse's frog for cracks, no matter how tough they look on the outside. 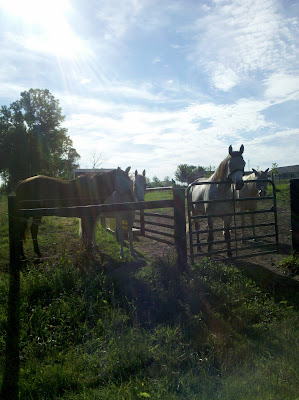 Masked (and one un-masked) ponies, looking adorable in the late afternoon sun. Miles says, "Whut?"
Posted by Sarah at 10:02 PM