I haven't been riding too much in the last week...a couple quick rides on Miles, which have been fine, though nothing of note-of course that boy always leaves a smile on my face, no matter what. He's been extra cute on the ground, just super affectionate and adorable, pushing his big 'ol head into my chest, leaving more slobber streaks than usual in my hair, the works...maybe he's rewarding me for the light work load:) Sorry bubs, that has more to do with hunters in the woods, crappy weather and rock-hard indoor arena surfaces than your bountiful charms. I think I'll let him take the credit though:)

Or maybe he's showing off for a certain lady...or competing for treats and scratches, who can say? I've been working a lot with Miles and Chamie on the ground together, and I have no qualms about leading them together and ponying Chamie off of Miles when the time comes. They are really cute together and I'm so happy my kids don't just tolerate but really seem to enjoy each others' company. If they weren't such opposites on the hard-keeper/air-fern spectrum, they would be great turnout buddies.

Miles is still doing well with the little Arab mare he is out with, but Chamie has a less than warm and fuzzy relationship with LaShore, Miles' old turnout buddy (they have a bromance for sure, and this is the only instance where I've EVER used that "word"). Don't get me wrong, they will graze together and there has been no naughtiness from either party-and I'm super grateful for that. Still, LaShore is "the boss", and Chamie is very cool towards him; I have to stop her from marching right out of the gate (because he wants treatings too!) when I bring her in. If he comes toward us, even innocently (at least it looks that way to this human), her ears go back and she gets out of town, or really wants to. Nevertheless, I know she is happy to be out with a horse at all, and she's got 2 sweet mares on one side of her pasture and Miles and the Arab mare on the other. LaShore really is a sweetheart, and he's not chasing her or being a jerk in any way-they can share the same hay pile and everything. I guess I'm just not used to seeing my girl at the bottom, lolz:) I'll get over it-I know horses don't take these things personally.

Here, have some pictures: 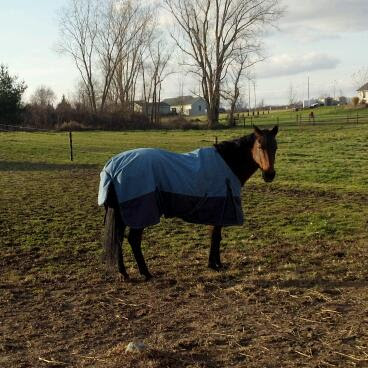 Chamie all bundled up. It's been chilly, but not COLD (by Michigan standards, of course). This day was in the 30's. I'm really trying to keep blanketing to a minimum though-she still goes in a stall at night as well. 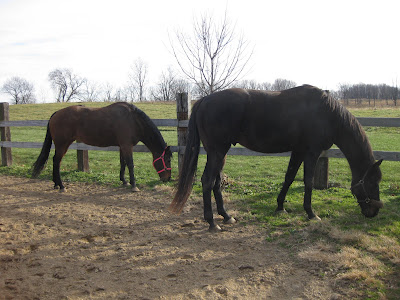 First turnout together! In the outdoor arena-of course, Chamie just wanted to go to town on whatever pathetic grass she could get her chompers on. Miles relented, after much spinning and running and showing off-when she barely raised an eyebrow, he sighed, lowered his head, and followed suit. It was pretty hilarious. 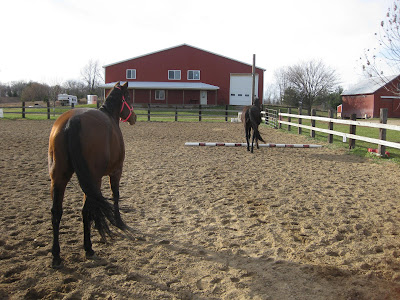 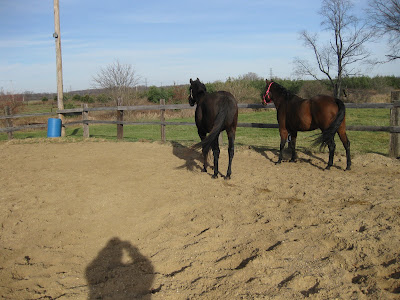 More Butts!! I don't know what stance she is doing here-no fluids were forthcoming. 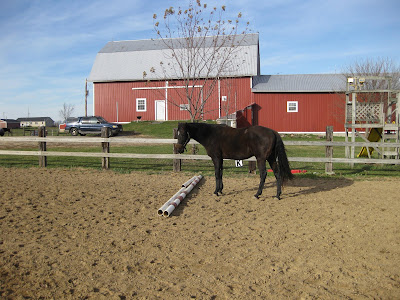 Not the most exciting picture of my boy, but look how BEEFY he is!!! His belly is actually round! And that butt! At this point I'm thinking I may be overly concerned with my horse's bum...and don't even get me started on how gorgeous his coat is. My big, black fake-stud gentleman:)
Posted by Sarah at 9:17 PM