First, Blogger is my enemy and if you have seen 5 different versions of this poorly written post, well...it's out to get me today, apparently. My apologies.

Second, I want to thank Jessica at Spotty Horse News and Natalie at Retired Racehorse for helping me organize my feelings and thoughts around this very ugly and complex issue. Most of this post was written in my comments to their posts. Go read these ladies if you're not already.

Now, in regards to the issue, I am TIRED of hearing this was Obama's decision, and I am super disappointed in many rescue groups I follow on facebook that are laying this legislation in his lap. Whether you are a fan of our President or not, he isn't stupid, and to introduce "horse slaughter legislation" would be a very stupid move, especially because he has stated outright that he is against this practice. The provision was thrown in there by Congress in a HUGE Ag bill, and Obama signed the bill to keep the USDA functioning. Even if he had vetoed the bill (which would be a disaster on way more levels than I care to get into right now), his veto would have been (rightly) overturned. It was a very sneaky move by certain representatives to throw this thing in there on a holiday weekend. OK, there's my one soapbox:)

Politics aside, the other thing we need to look at are "breeding incentive" programs. I'll say it, the AQHA and other stock breed organizations are the worst offenders . There are SOOOO many crap Quarter Horses (and Paint Horses, and to a lesser extent Appaloosas...see a pattern?) being bred out there it's frigging ridiculous...these ranches that churn out hundreds of mediocre or worse foals every year, and then send their "culls" to auction as yearlings, barely handled with shit conformation, make me so angry. There is NO market for these horses...none.

The Thoroughbred industry also has some major soul searching to do. Thankfully, there are a ton of wonderful rescue organizations for OTTBs out there, and TBs as a general rule (though there are ALWAYS exceptions) are bred to win races, so they are athletic and often easy to transition into another riding discipline. Yes, I know this is not always the case, and there are many debates out there about how they are breeding horses with no hoof or whatever, but I've still found the majority of OTTBs as sound or sounder than other breeds, and they were bred to be ATHLETIC, so they can transition to almost any horse sport. Some of the mediocre stock horses being bred? I swear half of them look like they are going to fall on their face if you push them beyond a jog. Yes, I am fully aware my bias is showing right now.

I understand there is a program out there where jockeys can contribute something like one dollar of their individual race winnings to Thoroughbred retirement organizations. Hey, while were at it, why don't we ask grooms to do the same, and exercise riders! ARE. YOU. KIDDING. ME. How about the frigging OWNERS and big time breeders pony up some cash for these animals that make them boatloads of money?! It would go a long way to rehabilitating the industry's image, that's for sure. And yes, I know there are very successful jockeys...but these athletes deserve every dollar they get for risking their lives in every race. It's time for the people with Real Money to do their part. I know some do...but it needs to be an industry wide standard.

I don't know all the answers. If I really trusted this US to enforce humane methods to slaughter horses, I would say, ok, yes, it's MUCH preferable to forcing these horses to travel thousands of miles to Mexico or Canada to meet their (horrific) ends. However, I don't believe it's possible to slaughter horses humanely on a mass scale, or at least I haven't seen evidence of it. I wish we still had local rendering plants, that would come to your house, put a bullet in the horse's head while they are grazing, and haul the carcass away. Awful? Yes. Humane? YES. It is easy to get self-righteous and say anyone with a horse should have the resources to euthanize said horse humanely. The fact is, however, that horses are the ones that suffer regardless. Many people desperate for money will take old Dobbin to the auction with the hope of getting a couple hundred dollars for him, rather than PAY a vet to euthanize Dobbin for hundreds of dollars out of his pocket that he probably doesn't have. I'm not interested in judging Dobbin's owner...I'm interested in keeping Dobbin from suffering for days or weeks before he is ultimately killed. Perhaps free euthanasia services would give Dobbin's owner an out that is kind to this horse he is fond of or maybe even loves. We should support such efforts-though raising money to kill horses is a tough sell.

I know some organizations are running free or low cost gelding clinics, and I think that's a great start. We HAVE to stop some of these horses from existing in the first place.

Finally, and perhaps most importantly, we need to look at this from a consumer health standpoint. I believe this is the most convincing argument against slaughter of all...most horses are SO not safe for consumption because of the drugs in their system, particularly TBs who have raced...they are almost guaranteed to have bute and steroids and who knows what else in their system. The same with so many older, unsound horses. Are we going to serve up possibly carcinogenic meat to people, or even carnivorous animals like our dogs or zoo animals? With all these things taken together (and notice not one of my arguments involve flowery language about how horses are noble creatures who have no business being on a dinner plate), HOW can we justify horse slaughter?

Having said all that, this old girl is MY greatest argument against horse slaughter, in the US or anywhere. 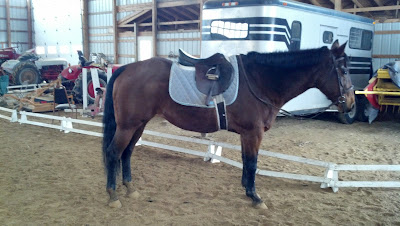