Miles' One Year (And Change) Anniversary

I'm a bad, bad horse mother. Actually, I'm just bad, bad with dates-birthdays, anniversaries, you name it (that Kyle's a lucky guy;). So when Miles' one year anniversary of coming to Michigan that marked the beginning of this long, strange, wonderful journey came and went on September 1st, I totally missed the boat.

Sorry Bubs. Here, have a meandering blog post filled with Odes to Miles.

Looking back to one year ago, of course, it wasn't all sunshine and roses. Who knows if I should have even thought about adopting another horse so soon after Ebony passed, let alone an OTTB? I questioned the wisdom of what I had done a lot in that first month, and of course I still missed Eb terribly. I tried not to compare Miles to her in those first days, but it was really hard not to as he was rearing up in the arena, screaming for other horses and looking anywhere but at me. Obviously, we worked through those issues, thank goodness!

It really wasn't just A horse I was looking for though, honestly. It was him. After seeing him on New Vocations website, I couldn't get him out of my head, and I never looked at other horses. Fate? I don't know about all that, but adopting him was certainly was the right thing to do, and in hindsight the only thing to do. I can't imagine having any other horse, or him ending up with any other owner. I'm still so, so grateful.

I couldn't be more pleased with where we are at this stage, a year later. I feel like we finally know each other, really, really well, and we trust each other (more or less-I haven't pushed those boundaries too far, admittedly. No trail ride yet, in other words. I'll get there!). Trust is pretty important when you're dealing with a 16.2 beast. It's funny, I always forget how tall he is now (again, I'm just used to him), until there's a new person at the barn, or someone asks, "How tall is he??" This is amusing to me because I'm used to being the person with the little quarter horse, and also because he would be about average in a barn full of hunter/jumpers or dressage horses. Surrounded by mostly stock horses and Arabians though, not so much. So yes, trust is a very, very good thing.

I love how respectful he is on the ground, and I'm proud of that-I've worked really hard with him to ensure his manners are what they should be, particularly because he gets led in and out of the barn a couple times a day by other folks. He's great about respecting my space, though he's still a little mouthy. He's never bitten, and it's all in "good fun" (I know, I know, not the ideal type of fun, particularly for humans). He just likes to mouth the lead line, or my jacket, or whatever is closest. I admit I think it's cute, but he will stop when I ask.

This brings me to the next thing I really adore about him-I don't think Miles has a malicious, mean or manipulative bone in his body. Of course he's not perfect, but in all instances whether on the ground or under saddle, he tries, and usually tries hard (that first week or two notwithstanding. And hey, I'm going to give him a break on that). I hate writing stuff like this because I'm superstitious, but he's never offered so much as a cow hop under saddle, let alone a real buck or rear. The one time I came off him we were outside the arena, he spooked, and simply wanted to get OUT of that area, and I was left behind. Hey, you can't have everything:) Still, I'll take that over a horse that wants me OFF their back. Miles can be lazy, but that's it. I am a FAR from perfect rider, but he puts up with me and lets me go at my own pace. He stands like a statue for mounting, isn't girthy and never avoids the bridle. Cripes, I don't think he even swishes his tail when he's annoyed. He's just a good-natured boy, who gives me the benefit of the doubt and likes working and hanging out with me in equal parts it seems.

Most of all, he is my sweet, sweet pony. He loves to (gently) push his head into me and just stand there while I rub his face. He's always looking to me for reassurance or just to see what I'm up to. I've never had a horse that actually looks back at me while I'm riding him, but he does, occasionally, just to check in I think. He's perfectly happy to leave his buddies to come with me, and he doesn't mind when his buddies leave him as long as I'm still there. These things didn't happen all at once, or all at the same time, but now it's all routine. It's a nice feeling.

I'll never get tired of his adorable face and those sweet nickers when I walk up to his pasture from the car. It's what keeps me making that loooong drive to the barn every day I can, even if it's not to ride. How could I let this face down? 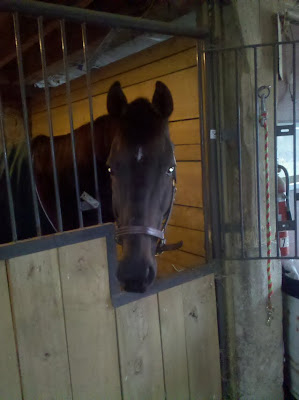 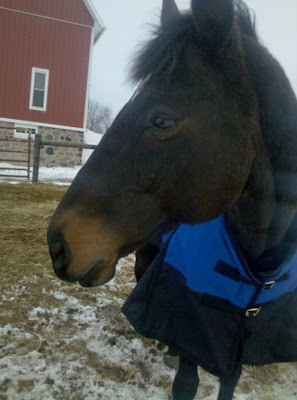 Happy Anniversary Bubs. Thanks for an amazing year.

PS-I won't make this mistake twice. Your birthday is in October, and will include party hats!