To The Clinic We Shall Go (assuming we're thawed out by then...)

Right now, Michigan Winter is basically making all of us her bitch. It's been like, a high of 18 with a windchill of 5 and a low of 0 the last couple days. We're supposed to have one more day of this ridiculousness before we're back up to balmy highs in the mid 20s. Miles is currently wrapped up in 2 1/2 layers, and I'm still worried about him being cold. He's been utilizing the shelter in their pasture quite a bit though, so I'm sure he's ok. It's just literally bone chilling out there. 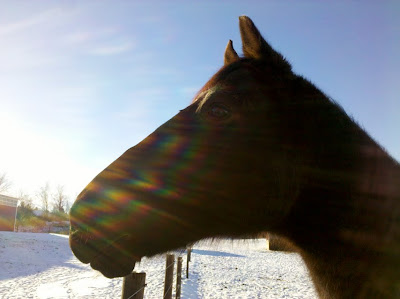 Pretty sure is was about 3 degrees when I took this. Mr. Regal quickly turned into Mr. Giant Nostril Who Craves Treatings, as seen below.
Thus, I haven't been able to ride AGAIN since my last post. Even if I wanted to brave the cold, it's just not safe to walk Miles from the barn up the small but super ice-y hill to get to the arena. Cripes, he was slip-sliding just walking across the driveway from his pasture to the barn, and so was I. I would just feel awful if something happened walking him up there, so we will have to wait until we either get more snow to cover the ice or we get a thaw, le siiiiiigh.

I've still been going out and feeding him his beet pulp/alfalfa mash and trying to do as much as I can with him in the barn-stretches and whatnot. Ah, speaking of, remember how I was super gung-ho about teaching him the Spanish Walk? Yeah, we're putting that on hold. Mr. Smarty Pants is now lifting a leg every time he sees me with a treat. He's not pawing (yet) but I really don't want to turn him into a paw-er...it's an annoying habit and not cool. So, if and when we resume training on this particular trick, I've decided to do it in the arena only, never in the barn. Stupid smart Thoroughbred!

Finally, in "It's about time!" news, Miles and I are going to be getting our first official instruction, hooray! My barn is having Cheri Theis, USDF L Judge out to do a clinic. I've never heard of her but she has a pretty impressive background, and people seem to speak highly of her. If you know anything else about her feel free to email me. I think this will be sooooo helpful to Miles and me. The clinic isn't until the end of March, so that will give us time to thaw out and get in regular work, and hopefully try him in either the Myler bit or a bitless bridle. I'd love to get feedback on my position, work on our transitions, particularly canter transitions and the right canter depart. If any Michigan peeps are interested in trailering in, lemme know and I'll send you the details.

Anyway, that's the big blah blah update for now. There's just not much to say when you're basically going out to the barn to feed your horse and that's it. Though Miles likes it. He likes it a lot. 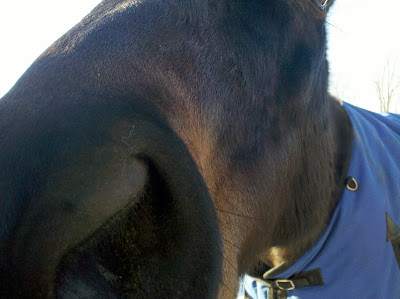 Miles Giant Schnoz hypnotizes you into feeding many treatings....cripes, how can you NOT look at that thing!
Posted by Sarah at 9:51 PM