"I'm Not A Thoroughbred Person..."

That's what I used to think, and I probably even said it out-loud occasionally. Of course, I've since re-evaluated this position, and I've even written a blog post to dismiss the notion. It would be really easy for me to say I was just a "Chamie" person (my first horse, a QH/TB, or appendix Quarter Horse), or an "Ebony" person (my first full TB) or a "Miles" person (no descriptor needed;). Their breeds were incidental.

For the longest time I've had this idea in my head that I like calm horses. Very sane. Not unpredictable-a horse you can have fun with. Certainly ex-racehorses are the last thing that come to mind when you're looking for a horse you can count on to keep you safe.

Well, I'm here to tell you that's wrong. Hear me out.

First of all, the fact that all 3 of the horses I've owned in my life were TBs or half-TBs should say something about my level of ignorance and denial. The reason for such denial is this-I'm not a confident rider. I know, none of us are supposed to admit that, but there it is. I work on it everyday, and you know what? So do lots and lots of other riders. I have no hard facts whatsoever, but most of us have had bad falls, injuries, or at the very least real scares in our work with these large beasties. The fear, if you want to call it that, is always there-something bad could happen.

Of course, that doesn't stop us now, does it? ;) Just because I have a nagging in the back of my head reminding me of my mortality doesn't mean I don't absolutely love riding. It's a weird push-pull; life is short, so do what you love and live in the moment. Then the old survival instinct kicks in.

Naturally, then, one might conclude, "Well, if you're going to ride, and you don't have all the confidence of let's say, Lucinda Greene (eventer extraordinaire), perhaps you should at least ride a horse that decreases your chance of death". I hear this attitude everywhere, from various places on the Internet to some people I board with. Give me a good old Quarter Horse any day, they say.

To that I say you take your Quarter Horse, I'll take my TB. While I may not be brimming with confidence, I can usually fake it when things get a little hairy and I really need to, for Miles' sake. My TB may be a little spooky at times, but he has never offered a buck or a rear under saddle. After he settled into the routine at the barn, which took him about a month, he has been nothing but a gentleman to deal with on the ground. More than that, he has been a delight to work around, and to work with. His heart, and his try, are something I've never encountered in any horse I've ever ridden. He's so happy when he knows he's been a good boy. He loves to work, and to learn new things. While he can be lazy, I can always fix that by engaging his big TB brain with something interesting. I've never used spurs and never done more with my whip than tap his shoulder. I've had him for over a year now, and without a trainer we've progressed and improved together.

And you know what? He's not the exception. While of course I think he's special and amazing, most TBs are more like him and less like...whatever it is that "non-TB" people think they are.

Is he sensitive? Absolutely, and I wouldn't have it any other way. I have to be a good rider to ride him well. That same sensitivity, I believe, is also the reason we have bonded so well. We can read each other's needs to a certain extent and react accordingly. That sensitivity is also what keeps us safe in certain situations. I can't wait to see him in the woods-no, that's not a joke:)

Is he flighty and spooky occasionally? Sure. Still, it's very rare for him to spook, so rare that it's an event to blog about when it does happen. I've also found that I actually prefer this to a horse that offers a cow-hop or a buck when they don't feel like working on any given day. I honestly don't think Miles has ever considered such a thing-the only time I've seen him buck is when he's feeling good on the lunge (or he has sheath issues, ha ha).

Thoroughbreds, and OTTBs in particular do indeed have their own idiosyncrasies and quirks that other horses may not. Said another way, I don't think any other breed has their heart, their try, their love of "work"-why would you want to ride a horse that would rather be in the barn or their pasture? I dig the fact that Miles looks forward to hanging out with me, and he really is happiest in regular work. TBs require a light hand and a quiet ride, and experienced leadership above all. So, maybe they're not for everyone. Still, I wouldn't have This One any other way. 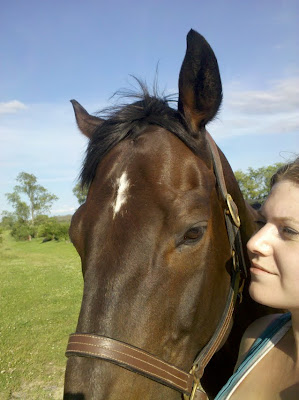 Yeah, I've used this pic before. Still, I loves it. Also, it was about 60 degrees warmer back then, siiiiigh.

Edited to add, in the harsh light of day: This post reads an awful lot like "Quarter Horses suck, TBs rule!" Sorry about that. I love me some Quarter Horses, really. This is a pro-TB post, not an anti-anything post.
Posted by Sarah at 10:42 PM