Miles has been moving better than ever after my last post. What a relief...I think he was just having an off day when I posted last, for whatever reason. He does have sizable "racing jewelry" on his ankles, so it's to be expected I suppose. I may start looking at giving him more support via nutritional supplements (SmartPak Senior or TLC, anyone?), at least during the winter months.

I did indeed get a lot of riding/lunging in this past weekend, and lo, it was awesome. Yesterday, after 3 days of riding, we played with more ground poles and tackling our first (very small) vertical on the lunge. Poor boy-the first couple times he gave it a big look and picked up his feet accordingly (keep in mind, the jump was maybe a couple inches higher than the tiny cross rails he was so comfortable with). Then I placed a pole in front of it-Crash Boom Bah! Poles were flying, standards fell over, it was a disaster; OK, in truth I laughed my butt off. He was such a good boy though-he didn't bolt away, spook or anything. He was just very...confused. Unfortunately, he was less than confident on our next go-around after I re-set everything. He hesitated right before the jump, sort of stopping in mid-air, and then LAUNCHING his big butt over the jump.

I praised him big time for going over, but also realized that he probably doesn't need to face something new every session we have, no matter how competent he is at what we're currently doing. It's quite alright to keep doing cross rails for now, and ground poles all by themselves, or ground poles leading up to a teeny tiny cross rail. It's too easy to take advantage of his enthusiastic, game nature, and that's the last thing I want. I don't want him worried ever at this stage if I can help it, and it's way too easy to push for more than he's ready for, particularly on the lunge. Good lesson for me.

In short, Miles is still sorting out what his body needs to do when presented with obstacles in front of him, and I need to respect that and give him time. He's figuring out striding, take off spots, straightness, how high to lift each foot, all that good stuff. Although nothing we've done is over 18", it's still very, very new.

If we do this right, we should be here in no time~ 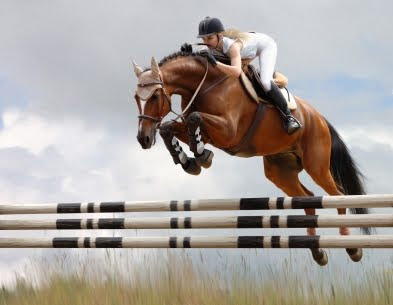